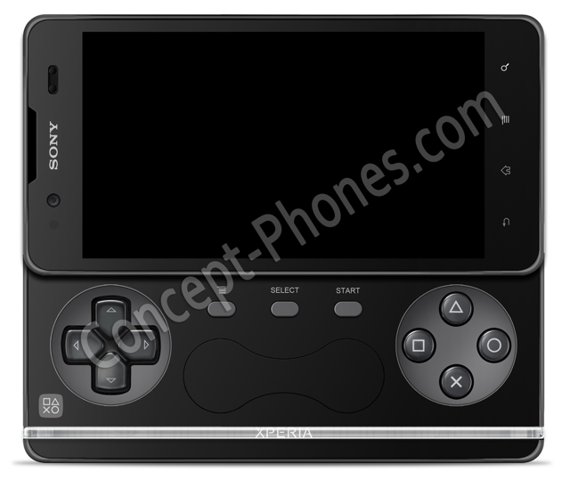 Standalone portable gaming machines are having a tough time in a world now populated by increasingly powerful smartphones that also happen to play video games. Even though Sony is giving its new PlayStation Vita quite the significant push, it’s still developing gaming-centric smartphones and here is what we think is the Sony Ericsson Xperia Play 2.

No, unlike the PlayStation Vita, the Xperia Play 2 does not appear to have dual thumbsticks or a touch-sensitive panel on the back. Instead, the basic control scheme remains unchanged from the first Xperia Play, meaning you get a D-pad, shoulder buttons, and a couple of touch-sensitive pads in the middle meant to mimic the controls of thumbsticks.

You will notice that they’ve seemingly abandoned the curvaceous nature of the first Xperia Play (and most other Xperia smartphones) for something a little more squared off, though it still has rounded corners. The rumored spec sheet includes a peppy 1.5GHz dual-core Snapdragon S4 processor, 4.3-inch 1280×720 display, and an 8.1MP rear camera with LED flash. And yes, it’s PlayStation Certified, of course. The touch sensitive Android buttons seem to point toward Gingerbread, but there’s likely an ICS update in the works too.

There’s no way for us to know if this rendering is legitimate, so take this with a grain of gaming salt.