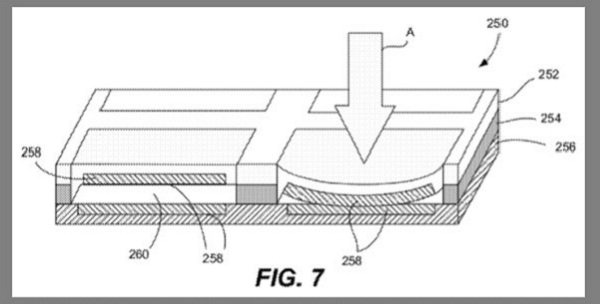 In the world of technology making a device thinner is always perceived as an improvement. That is why all the manufacturers from around the world try to make their products as slim as possible. Apple is also following a similar path and appears to be planning thinner keyboards for bringing out thinner notebook computers.

The new info comes via a patent application filed by Apple entitled “Single Support Lever Keyboard Mechanism“. It talks about a peculiar single support lever mechanism which will help to shrink the size of a keyboard without affecting its performance.

Unlike the scissor-switch mechanism (which uses a scissor like attachment to keep the keys up) seen in existing laptop keyboards, Apple’s new mechanism involves keys positioned on the ends of a long lever. When the key is pressed, the lever bends and an “elastomeric spacer” underneath the key (but also on the lever) comes into contact with a metal dome positioned below. This sends a key down signal to the processor.

Apple says that the method allows for the top portion of the key cap to be formed of a multitude of materials “including, but not limited to, wood, stone, polished meteorite, ceramic, metal, and glass“. The spacer will be made of a material such as silcone rubber which will reduce rattling on the keyboard in addition to giving the user a snappy feel.

The advantage of this new design is that the key will be travelling just 0.2 mm. The mechanism will allow Apple to make a thinner keyboard which in turn helps to design “a thin-profile computing device without compromising the tactile feel of the keyboard“.

Is there anyone out there waiting for an extremely thin MacBook Air?