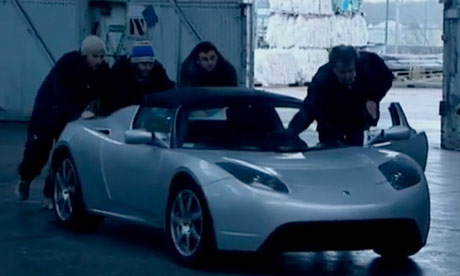 Tesla Motors might be hiding a big battery issue from their customers. Apparently, the company’s electric vehicles, including their Roadster and the upcoming Model S, feature a battery pack which if completely discharged might leave a huge financial burden on the unfortunate owner. But is the owner unfortunate, or simply a bit careless?

According to an article by Michael Degusta over at theunderstatement.com, if a Tesla electric car, such as the Roadster is parked unplugged, it will eventually become what the company calls a “brick”. The vehicle can no more be started or even pushed down the road. This is the result of the car’s always-on subsystems which continually feed on the battery.

And when the battery dies, the owner ends up paying Tesla approximately $40,000 for replacing the battery pack. Reportedly, there is no protection available via warranty or a car insurance policy for this particular problem. Apparently, at least five Tesla owners were unfortunate enough to end up with this problem. Degusta says Tesla is unwilling to let their customers know about the issue, although they know that it’s a big one.

But don’t you have a slight feeling that Degusta’s argument is nonsense. That’s because it is.

If you are familiar with electric cars or batteries or even smartphones, you might know the fact that the battery which is not recharged will eventually die. And since the battery pack on a Roadster is not your usual $100 laptop battery, people will have to pay a huge price for not finding the time for maintenance.

And a Tesla, as you know, has an electric motor. There is lot less maintenance required for the vehicle when compared to a vehicle with a combustion engine. So it’s not too difficult to pay attention to the charge in the battery packs. And the company has designed the car in such a way that it warns the owner (and even the company, in the case of the latest Roadster) when the battery is low. The owners who ended up with a brick might have ignored all the warnings.

So who is culpable here?

Tesla has this to say in response to Degusta’s article: “All automobiles require some level of owner care. For example, combustion vehicles require regular oil changes or the engine will be destroyed. Electric vehicles should be plugged in and charging when not in use for maximum performance. All batteries are subject to damage if the charge is kept at zero for long periods of time. However, Tesla avoids this problem in virtually all instances with numerous counter-measures. Tesla batteries can remain unplugged for weeks (or even months), without reaching zero state of charge. Owners of Roadster 2.0 and all subsequent Tesla products can request that their vehicle alert Tesla if SOC falls to a low level. All Tesla vehicles emit various visual and audible warnings if the battery pack falls below 5 percent SOC. Tesla provides extensive maintenance recommendations as part of the customer experience”.