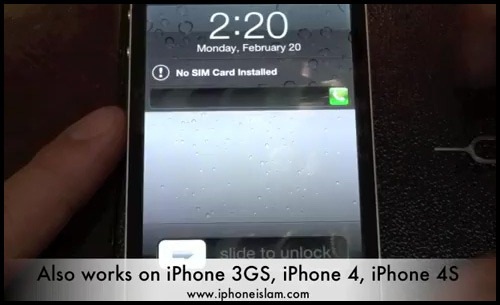 Apple might be a bit busy preparing for the official launch of their next generation iPad and iOS 5.1. But it appears like they will have to find more time to fix a new bug in iOS 5.0.1 which allows a person to get unauthorized access to the contacts and the calling features of an iPhone.

The details on the new issue comes courtesy of  iPhoneislam, who believe that it is a “major” flaw. But after watching the video, you will most probably agree with us on the fact that the passcode bypassing allowed by this bug is quite difficult to pull off.

The hack involves inserting and ejecting the iPhone’s SIM card, while you try to call the device. If you perform this for long enough, you will eventually get access to the phone app, and you will be able to make calls as well. But for the hack to work, it is required that you know the victim’s phone number (or have a spare SIM card) and a strong belief that it can be done.

It appears to be a very minor bug, but still, it won’t be very nice if someone who stole your iPhone gets free access to your contacts. Apple will most likely release a fix for it along with the upcoming iOS 5.1. In the meantime, you can check out the guy sweating it out in the video below.