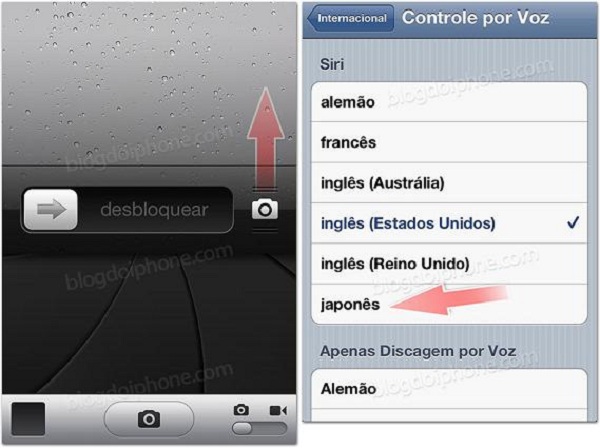 The tech world is anxiously awaiting the arrival of Apple’s next generation iPad as well as the next version of their mobile OS, iOS 5.1. So far there hasn’t been any confirmation about the release date or the features of both the products. But it appears like some folks have gained access to a pre-GM version of iOS 5.1, screenshots of which have revealed upcoming features.

As you can see in the above image, iOS 5.1 may arrive with a new lockscreen camera slider. This will allow you to launch the camera app directly from the lockscreen with a vertical sliding action on the new icon. That’s certainly something that will be really useful for taking snaps quickly and easily.

Just in case you are wondering, you have to double press the home button for summoning up the camera button in current versions.  There were rumors flying around earlier that suggested Siri will be supporting Japanese iPhone 4S owners in the future. The above screenshot of Siri’s settings is evidence on the matter.  As you already know, Nuance is the driving force behind Siri and it’s worth noting that Nuance’s Dragon Dictation already supports Japanese. So a Japanese Siri is certainly not far away.

Rumors suggest that Apple will most likely release iOS 5.1 alongside iPad 3 on March 7th. But make sure you stay tuned to this space for updates.