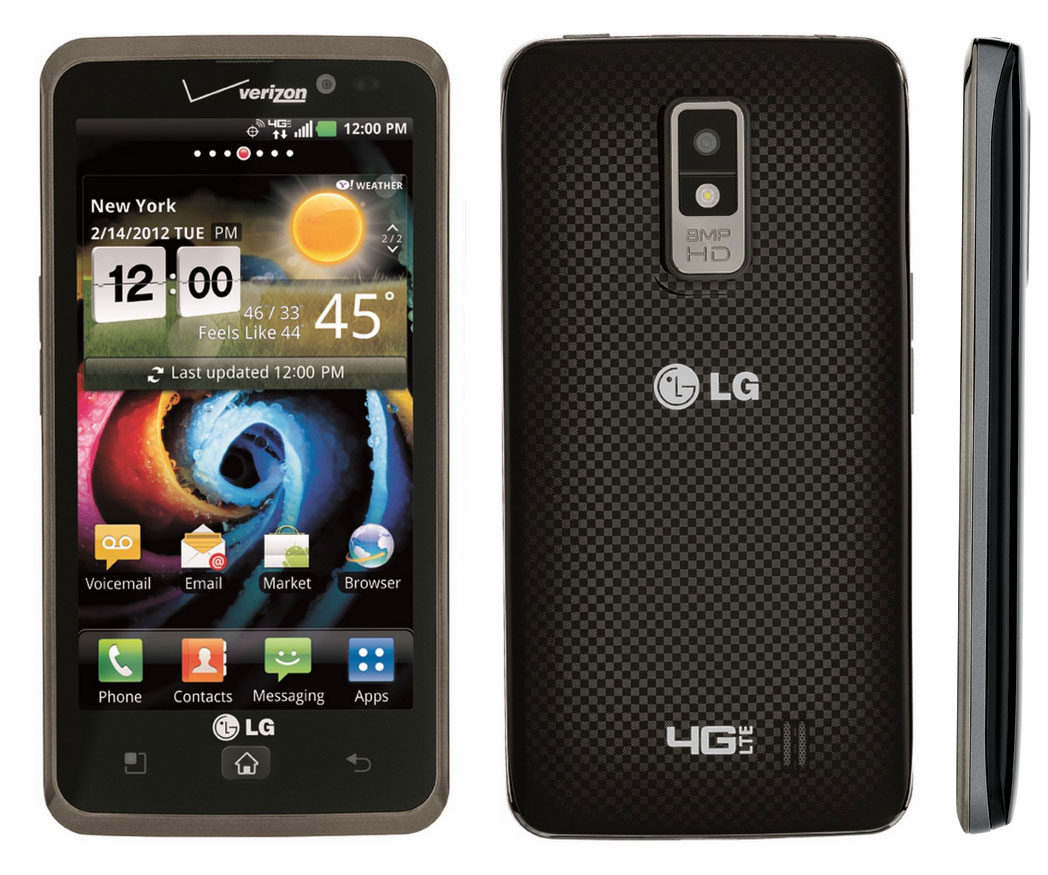 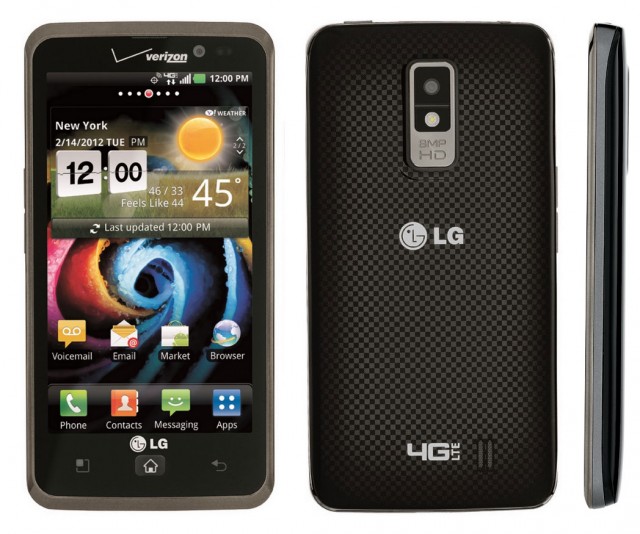 LG’s newest flagship device has arrived on Verizon, but haven’t we seen this device before? Essentially, the LG Spectrum is in fact very similar to the 4G LTE supporting LG Nitro HD on AT&T and the LG Optimus LTE north of the border with Bell. Beneath it’s 4.5-inch IPS display beats the heart of a 1.5GHz dual-core processor, 1GB of RAM, a 1,830mAh battery and 4GB of internal storage, supplemented by 16GB of microSD memory. The handset measures 5.33-inches by 2.71-inches, and is just .41-inches thick. The Spectrum currently retails for $199 with a 2-year contract with Verizon.

While many users out there who have gotten their hands on the Spectrum say that it isn’t an attractive device, I have to disagree. It is true that the design is very simple, and for some users this translates over to ‘boring’. LG didn’t go for a beautiful or eye-catching design, they went for a basic, clean look that isn’t exciting but is highly functional in a business sort of way. Of course, some of you out there are looking for a phone that you can show off to your friends and have them drooling over, and admittedly this phone is not it. It’s more of a “blend in to the crowd” type of phone, but I certainly wouldn’t call it ugly.

The true elements worth showing off boil down to its 4G LTE speeds, and not the outward appearance.

Hardware
While 4G LTE is a very important feature on the Spectrum, it is the large 4.5-inch True HD IPS display panel that really sells this device. Watching the pre-loaded HD trailers was a thrill and admittedly this little guy’s screen looked a lot better than my own 2-year old HDTV. The colors, contrast, and overall clarity proved perfectly crisp. The front is coated in Gorilla Glass and again, is really quite impressive.

For those picky about pixel density, there is little to complain about with the Spectrum thanks to its IPS display packing 319 ppi. This is a little higher than even the iPhone 4s, which offers 319 ppi. Beyond the screen, the front also bares three capacitive buttons for Menu, Home, and Back. Additionally, the face of the unit has a 1.3MP front-facing camera.

At the unit’s top you’ll find a power button, a 3.5mm headphone jack, and a USB charging port. The volume rocker is on the left-hand side, and on the right? Actually nothing, there are no ports or buttons of any kind on the right, leaving it as blank real-estate. 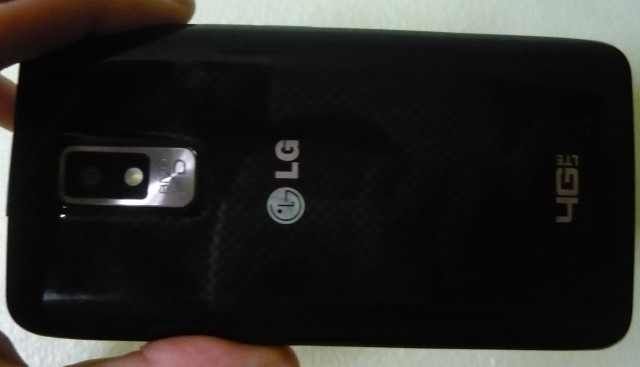 On the backside we have the Spectrum’s primary camera, an 8MP shooter that actually performs rather well. There is actually minimal shutter lag (under a second) and it’s video camera can even capture in 1080p. The camera software is the same as you’ll find on the Nitro HD and allows you to shuffle between portrait, landscape, sports, sunset and even night mode.

One qualm I do have with the back of this phone is its backing is a finger-print magnet, not only this, but it is a little sleek to the touch and doesn’t quite offer the best grip out there. 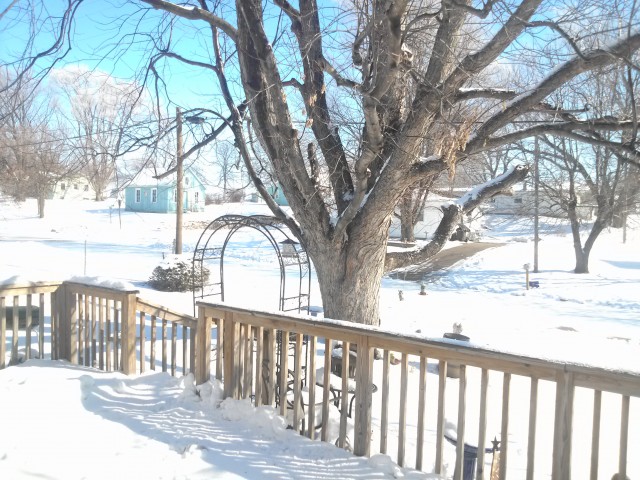 This is probably the only major disappointment I found when testing out the Spectrum, it is still using Gingerbread. Don’t get me wrong, Gingerbread is more than capable of providing a great experience, but I had hoped to get my hands on ICS with the Spectrum. The good news is that at some undefined point in time LG promises that the headset will in fact get an upgrade to ICS.  For now we get a custom-skinned version of Android Gingerbread 2.3.5. The device has seven different home-screens and some customized widgets for weather, news and other functions like social networking. Honestly, the skin really doesn’t offer anything exceptionally great to the Android experience, other than perhaps the App folder and its collapsible categories.  The Spectrum also comes with a good amount of bloatware and demos that are best forgotten.

For sports fans out there though, one app that might be worth mentioning is the ESPN Score Center App. This program allows you to easily follow and receive the most comprehensive sports coverage imaginable, including tracking teams from over 500 leagues from MLB to NFL, and even sports like Cricket, Rugby, and Nascar. 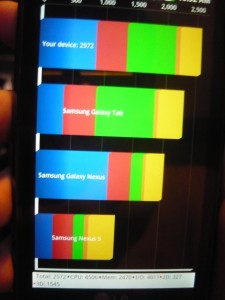 I’ve really gotten to know the Spectrum well over the past few days and must admit, I really like it. It isn’t necessarily the most powerful phone out there, but it certainly performs quite admirably, offers 4G LTE and has a truly beautiful HD IPS display.

But how does it fare in benchmark test? I ran it through Quadrant Standard to give our users a better look. As you can see from the benchmark shot on the right, the Spectrum scored 2400, putting it just a little over Samsung’s Galaxy Tab. Keep in mind that is fairly impressive considering this is a smartphone, not a tablet. Notably, its CPU ranked 4071 and its 3D capabilities came in at 1448.

You will find that its Qualcomm MSM8660 1.5GHz dual-core processor and 1GB of RAM should be more than enough to compete even with many of the mid-range tablets out there. Overall, it’s quite an impressive phone in my personal opinion. 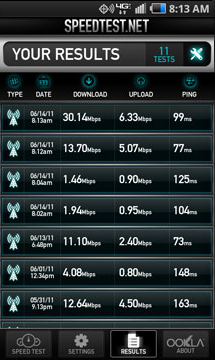 Unfortunately, I can’t say as much for its battery capabilities. In your pocket, with 4G LTE largely not active, and only occasional use, it can easily do around eight hours. Unfortunately, if you hit it hard with 4G LTE and other intensive tasks like HD, you’ll find yourself lucky to get much more than four hours.

This is pretty common with 4G LTE, which is known for its battery draining side affects. Although I’d love to see a better battery experience with 4G LTE running, for now you can always just disable the LTE when you aren’t using it.

How does the 4G LTE itself perform, though? First off, I live in a rural enough area that I had to head towards a friend in a bigger city just to find out. Once there though, I admit I was enthralled by the speed abilities, though it doesn’t take much to impress me because I’m used to only 3-4 Mbps speeds.

There were moments when I could only hit around 1.46 Mbps, but for the most part it averaged out over 10 Mbps. It even managed to get up to 30 Mbps at one point, which for someone used to 3-4 Mbps speeds was damn-near astounding.

While not all users will fall in love with the simple aesthetics of the LG Spectrum, I certainly found myself mesmerized by the overall experience I had. I enjoyed the HD capabilities and large screen, messing around with apps like the Siri-clone “Evi”, and playing with the camera. It certainly was a major step up from my older entry-level LG Optimus, that’s for sure (of course any phone would have been better than my older entry smartphone).

While I can’t get 4G LTE in my area, I spend a lot of time in the city and still get 3G near my home, so the bottom line is that 4G LTE support is very important for this phone, but it’s not the only feature worth noting on the device.

If you don’t like the looks of the phone, you’ll at least be won over by its high-end HD IPS display. The 4G LTE isn’t too bad either.

For those that want a little better aesthetics, you might want to check out the Droid RAZR. If you are upset about the battery life though? You won’t find anywhere better to turn if you are interested in 4G LTE, bad battery life seems to be the price you pay for speed, at least for now.