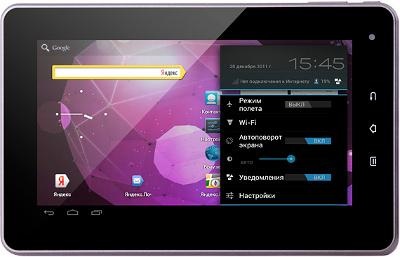 The reason why most people don’t go after budget devices is that those devices won’t be too impressive on the specs side. But you all should check out the teXet TM-7025, which is a new affordable Android tablet just released in Russia.

Although it is a drawback that the new tablet runs only Android 2.3.4 Gingerbread, ICS has been “promised.” But, get this, the new device is coming with 3D video playback. And it boasts a Boxchip A10 Cortex A8 1GHz processor along with 512MB of RAM, 4GB of internal memory, and a microSD card slot for expanding memory.

It features a 7-inch capacitive TFT LCD display that looks pretty stylish. But for a better viewing experience, you can connect the device to your HDTV via its miniHDMI connector.

Other features include Wi-Fi, a miniUSB port, a 0.3 megapixel front-facing camera, an accelerometer and a 3,100 mAh Li-Ion battery. You can also connect the tablet to a 500 GB hard drive without the need for extra power. It’s just 12.1mm thin and weighs in at only 13 ounces.

And all that will cost only 5,999 rubles (around $200) in Russia. Now that’s a pretty cheap tablet. And if it’s coming to the US, there is a possibility that it will be available with an even cheaper price tag. We will surely let you know if this one reaches the gates of FCC.