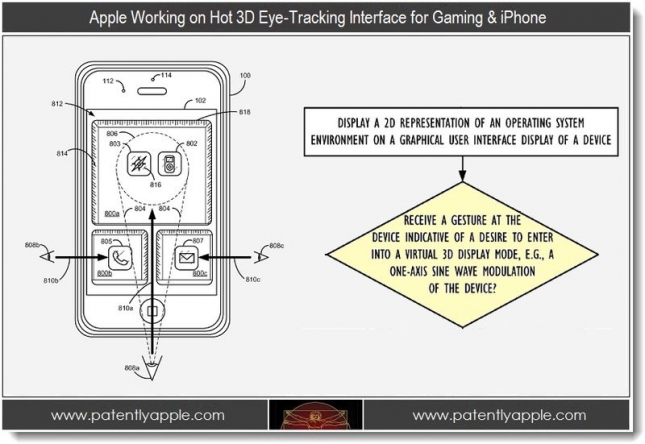 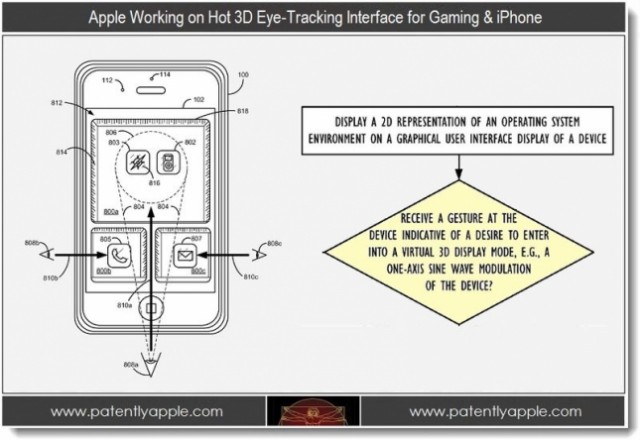 What if you could look at a 3D object on your iPhone and when you moved your head or shifted your eyes, the display would respond accordingly to give you what would be the real world perspective change? Apparently, that could very well be the kind of technology we’ll be finding in the iPhone 5.

There was a patent application submitted by Apple that seems to approach that kind of functionality. It talks about a user interface that utilizes 3D eye-tracking. If we take the example of a first person shooter game, you could simply look toward the right side of the screen for your character to turn and look toward the right side of the environment. The same kind of idea could be extended to photography and videography too.

The technology would involve a front-facing camera, of course, but it’d also take advantage of data coming in from the accelerometer and compass to alter the perspective of the three-dimensional visuals being depicted on the device display. The patent seems to lend itself to portable iOS devices, but it also leaves the door open for 3D eye-tracking in an iMac or MacBook. After all, Microsoft is doing the Kinect for PCs too.

To be fair, the original filing for this patent was way back in Q3 2010 and we haven’t seen Apple do anything with it since then. If that’s the case, they may have already abandoned the project… or it could be coming to the iPhone 5, iPhone 6, or some other device in the future. As always, time will tell.