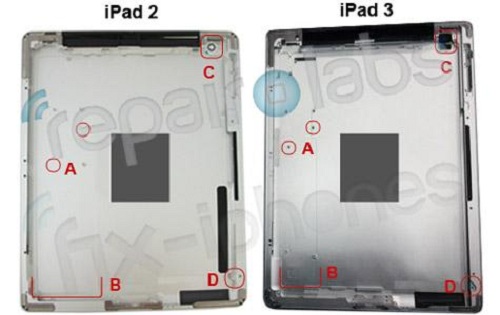 There are already tons of rumors about the much anticipated Apple iPad 3 launch circulating. Of course, we know from previous years experience that we can expect something new from Apple, most likely in March again. Since the Cupertino company has scheduled a big media event for the first week of March, AllThingsD says its the iPad 3.

The back panel that you see in the above image is supposed to be that of the iPad 3. And when compared to the rear housing of the iPad 2, the new device appears to be coming with some changes.

According to available info, the new housing has been designed to fit a smaller logic board. The additional space might be there for a larger battery. From the looks of things an updated camera (rumored to be similar to the one on the iPhone 4S) is also coming, and the mystery housing also features a different LCD mounting system.

If indeed this is the iPad 3 rear panel, its arrival at this time suggests that the device is very close to being unveiled. A release in March or April is most likely, especially when considering hints from casing and accessory makers who showed off their products at CES 2012.

You might know that a longer battery life is one of the iPad’s strongest points. So the rumored bigger battery will be much needed if the company fits a 2048×1536 Retina Display, a quad-core processor and 4G LTE support into the next iPad. Customers won’t welcome a device with good specs but poor battery life.

And speaking of the Retina Display, there are rumors that the iPad 3 might feature Sharp’s IGZO (Indium Gallium Zinc Oxide) display. Besides delivering a high resolution of up to 330 dots per inch, these displays cost less to produce and there is no need for LED backlights. The display will also be thinner.

The latest info suggests that Sharp’s factories have increased the production of the IGZO displays. And there haven’t been any reports about the displays being available commercially. So where are they headed? Apple is certainly a possibility.

But there are also rumors about a dual light bar design for supporting high-resolution IPS display from Samsung and LG.

Is your head aching after all these speculations and rumors? Hopefully, we won’t have to wait too long to hear an official announcement from Apple. But then the iPad 4 talks will start.