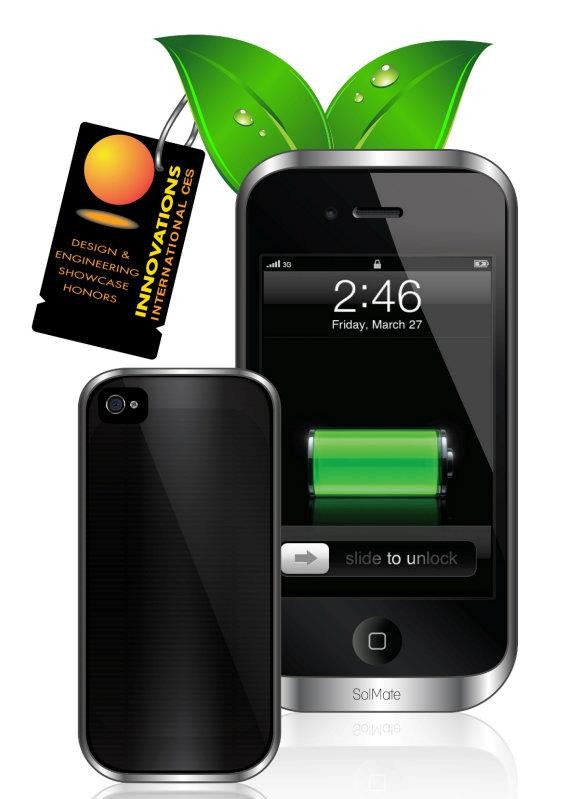 Okay, so solar power chargers aren’t anything new per say, so why should we care about this one?  First off, it’s design looks solid and it is from folks who clearly have worked for reputable technology companies in the past — Adam Benzion, a former Microsoft employee, and Jamie Wojcik, a former designer from Texas Instruments — beyond that, this is highly polished compared to cheaper alternatives (such as Chinese solar solution), and even consists of an additional battery and a 16-bit microcontroller that communicates with a custom iOS app for the SolMate.

Another big selling point according to Benzion is that most phones require you to have the solar panel in direct sunlight for at least four or five hours a day in order to truly get a good charge. This isn’t the case for the SolMate, which actually works in the shade as well (just at a slower charging rate).

Directly quoted from the above video, Jamie Wojcik had this to say about the SolMate:

“Everyone that has done a mobile solar charger has to be in direct sunlight, and you have to have the planets align and the sun align exactly … to get any charge out of it,” Wojcik said. “Ours is different. We can charge in the shade, although you won’t get as good of charging, but you should be able to get at least your standby current in any light condition.”

The SolMate is being marked under the company name “GreenSimian” and plans to start developing the device this spring with a shipping starting in May. This was likely provided that they meet their goal of $30,000 from Kickstarter pledges, a dollar amount that they have already exceeded.

If you want to get your hands on one when they start shipping, head over to Kickstarter and invest a minimum of $99.

Developed by GreenSimian™, the brainchild of two Seattle veterans from Microsoft and Texas Instruments, SolMate for iPhone 4/4S is the duo’s first product that delivers unmatched portable power for power-hungry iPhone users. Milled from a single aluminum block, the form-fitting SolMate casing sports a trifecta of power harvesting options; starting with a Qi (Chee) inductive charging chip, a powerful 18%-efficient solar cell, a custom 1600 mA lithium-ion battery and proprietary power management electronics and software that replicates utility-scale solar power plant in the palm of your hands. SolMate’s solar technology will generate up 30% additional uptime of the native iPhone battery on an average daily use, while its backup battery will doubles the iPhone’s battery life.

“SolMate is not another iPhone casing. It’s a seductive combination of software, microelectronics and power-generating semi-conductors that take mobile power to a new level” said Jamie Wojcik, GreenSimian CTO and co-founder.

“We would like to invite technology enthusiasts to pre-order SolMate via our Kickstarter.com project dubbed “SolMate: iPhone’s Hottest Solar, Inductive and Battery Case” said Adam Benzion, GreenSimian’s co-founder and CEO.

The company is planning on delivering a slew of additional products in the next 12 months that will address the growing needs of smartphone users who want “on-the-go” power solutions. The company’s SolCurve™ technology will be used to power its device line up.

About GreenSimian™
GreenSimian is a Seattle-based company looking to change how we think about renewable portable power. Our products are meticulously engineered with performance in mind and are beautifully designed for people who love their gadgets, spend lots of time on the go and want to stay powered wherever they are. http://www.greensimian.com.