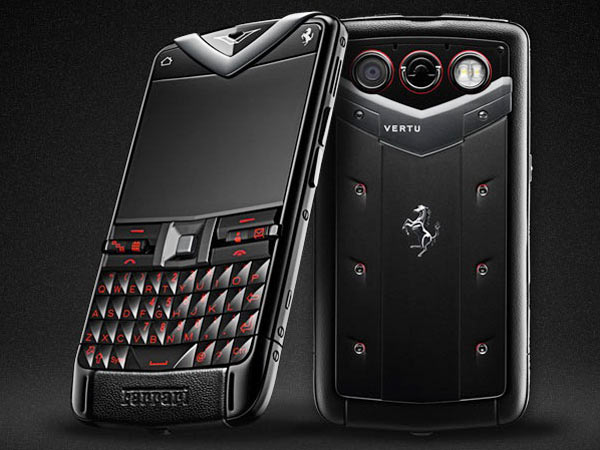 Is it a sports car? Is it a Blackberry? Maybe, it’s Vertu’s Ferrari-inspired new luxury phone.

The Constellation Quest Ferrari by Vertu derives its inspiration from the sharp curves of the Italian sports car manufacturer’s ‘458 Italia’ car. And yes, it comes with the iconic Ferrari logo too, the prancing horse. Ferrari cars come with custom-made plush leather interiors. Vertu’s Constellation Quest Ferrari doesn’t fall short in that category either: the front portion of the handset has leather exteriors with the Cavellino Rampante logo embossed on it. And it needn’t be said that the leather is the same hand-made Italian calf ones used by Ferrari in its cars.

The luxury smartphone is made from polished stainless steel which makes it sturdy. Vertu has even included a titanium battery cover for the handset: Super cool, isn’t it?   To add to it, polished sapphire crystal and polished black ceramic are also used in crafting the handset. But the speedometer and tachometer are missing!

Aha! Vertu has found an answer for that too. The Constellation Quest Ferrari, which is handmade by a single craftsman, has a new analogue clock which is inspired by the rev-counter on the ‘458 Italia’. This is the second time that Vertu has collaborated with Ferrari in bringing out a luxury handset. Their first courtship resulted in the Ascent Ferrari GT, a much sexier looking outcome than Blackberry and Porsche had with their ugly P’9981 offspring.  We can only image what the price of this one will ring in at.