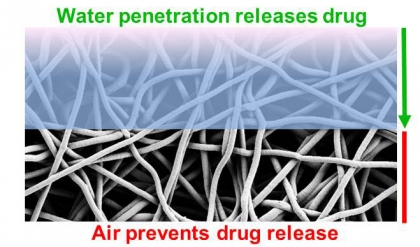 When it comes to pain management, there aren’t really any long duration methods that really work effectively, at least not until now.

A team of researchers led by Professor Mark Grinstaff have a developed a unique material and drug delivery mechanism that could allow implants that release at a designated rate for months.

Such a system could revolutionize the way we treat patients with chronic pain or even as a system to prevent cancer tumor recurrence after a surgical resection.

Grinstaff and members of his team recently reported information regarding their novel drug system to the Journal of American Chemical Society on the 16th of January.

So what exactly is the system made up of? It contains a biocompatible, highly porous, 3D polymer material that contains your medical doctor’s drug of choice and a volume of air that slows infiltration from surrounding water. As the water seeps into the material, it pushes out and therefore slowly releases the drug.

The idea was to create a 3D material that has polymer fibers throughout and air trapped within. If we can slow the penetration of water into the structure, it will slow the release of the drug.

If the system can be perfected, it could prove to be a major breakthrough for the medical and scientific community, and the drug companies too. The implications of such a delivery system are very clear and this could prove a major game changer for the fight against cancer, not to mention for the aid of those with serious pain issues like terminal cancer.

Loaded with a widely used anti-cancer drug called SN-38 in in vitro experiments, the polymer mesh and internal air pocket proved to be robust and effective against lung cancer cells in solution for more than 60 days, indicating its suitability for long-term drug delivery.  (A similar material without air releases its drug within a week.) Grinstaff and his collaborators next plan to conduct a series of in vivo experiments to evaluate the system’s efficiency and potential clinical effectiveness—a critical preliminary step before initiating clinical trials.