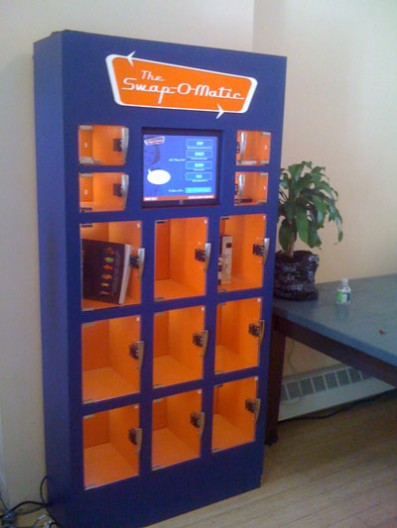 You know the old saying, “One man’s trash is another man’s treasure”? It seems that Brooklyn designer Lina Fenequito is taking this concept to a whole new level, with a strange new twist on bartering, or pawning, if you will.

The Swap-O-Matic is a vending machine that is unlike anything else I’ve ever happened across. Instead of bombarding us with soda, candy, or chips, the Swap-O-Matic lets us trade out an old item that we no longer want in exchange for a new one.

The machine has various compartments for placing your unwanted item and works by giving new ‘users’ three free credits. Each time you put in an item you can either earn an additional credit or trade your item for another one.

In order to keep users from cheating the system though, you are required to enter you email. This is a wise idea because it makes it easier to track users and prevent foul-play. When our source asked about the machine, Fenequito had this to say about her unique invention:

Initially, the Swap-O-Matic is intended to inspire all of us to rethink our consumption habits, and consider more sustainable methods such as trading and reusing goods. On a much larger scale, the ultimate goal is for the Swap-O-Matic to inspire a movement, affecting change for large numbers of people and communities.

While I don’t expect these to pop up everywhere, by any means, it is still a very unique and inspiring machine. If you happen to live in New York City you might certainly have a chance to come across this machine though, as it roams through the five boroughs (for now, it never stays in one place for very long). Additionally, Lina is very interested in creating more machines in the near future.

I sincerely applaud Lina’s efforts, and wish that more of us out there took the time to do something different when it comes to ridding ourselves of unwanted items. Think about the Swap-O-Matic and what you can do to help you community next time you reach for your trashcan to toss away your unwanted goods.