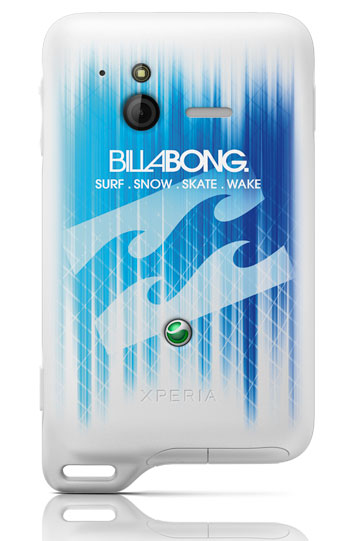 As nice as your shiny new smartphone may be, it’s not going to be all that useful after it gets tugged away by the surf. For people who are more likely enjoy some extreme sports, Sony Ericsson has partnered up with Billabong to create a more extreme-friendly smartphone. It’s the Xperia active Billabong Edition.

Designed “with extreme sports enthusiasts in mind,” this phone represents the a larger partnership between the two brands, stretching out to major Billabong events around the world. They’ve also got exclusive wallpapers and other mobile content for the Billabong Edition smartphone, as well as the Billabong Surf Trip game for the Xperia Play PlayStation phone.

Realistically, the Billabong Edition handset is just a branded version of the existing Sony Ericsson Xperia active. This means that it has IP67 certification for dust and water resistance, as well as “wet finger tracking” technology on its smaller 3-inch touchscreen display. It’s tough and scratch resistant. Rounding out the extreme specs are a 5MP camera, FM radio with RDS, Timescape, DLNA support, Reality Display with Mobile BRAVIA Engine, and Google Android. Plus that handy loop for your lanyard or carabiner clip.

Look for it in “select markets” starting now.