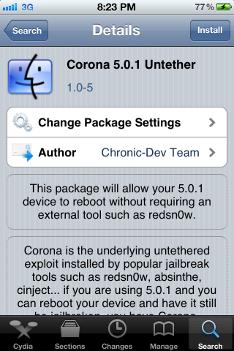 While everyone has been very appreciative of Corona, the tool that finally freed A5 devices from Apple’s shackles, there have been a few minor problems that are a side-effect of the jailbreak.

Luckily, what was already great is becoming even better.

It seems that a new update has been released for the Corona untethered jailbreak tool. The new update makes sure that Apple’s eBook app consistently works for everyone, something the last version had problems with, and also fixes overall stability issues for those running iOS 5.0.

Saurik, the father of Cydia, highly recommends that everyone that has a jailbroken iOS 5.0.1 should make the upgrade to this latest Corona update. You can choose from two different downloads: one update that runs from Windows and the other directly for upgrading from Mac.