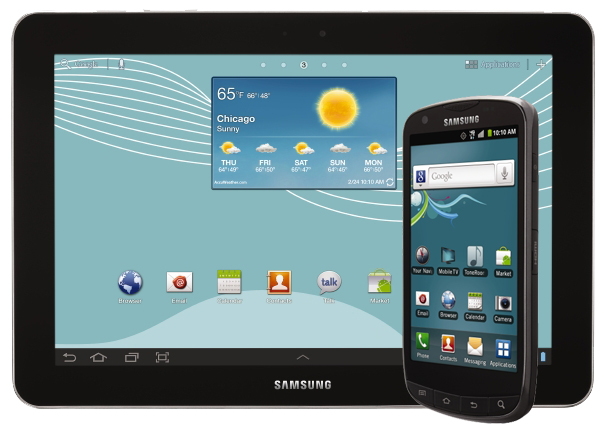 US Cellular has finally joined the 4G LTE Bandwagon, launching its own service. While many of us have been expecting this for a while, it was a bit unclear which 4G LTE phones would be the first to hit the company’s new network.

We all know of the Galaxy Tab by this point and expect little surprises with the US Cellular version, but the Aviator is something new, or so it seems. At first glance it strongly resembles the Droid Charge. What we do know is that it will offer a 4.3-inch WVGA super AMOLED Plus display, run Android 2.3.6, have a 8MP rear camera, a front-facing camera, and an HDMI port.

For now this is all we know, but go ahead and take a look at the US Cellular press release below to hear it straight from the horses mouth.

CHICAGO (Feb. 1, 2012) – U.S. Cellular (NYSE: USM), in conjunction with its partner, King Street Wireless, is launching a 4G LTE network next month that will enhance the wireless experience with countless entertainment possibilities and help customers simplify and organize their lives. The 4G LTE network will cover 25 percent of U.S. Cellular’s customers and will coincide with the launch of the Android-powered Samsung Galaxy Tab™ 10.1 4G LTE mobile tablet followed shortly by the Samsung Galaxy S® Aviator™ 4G LTE smartphone.

4G LTE speeds allow customers to begin watching a movie in seconds and enjoy smoother video streaming with little to no buffering, and video chatting with family or business colleagues is seamless.

With the Samsung Galaxy S® Aviator™, customers have the ability to talk and access the Internet at the same time. They can talk to their family about dinner plans while downloading an app to find nearby restaurants and simultaneously check out reviews online.

The March rollout of 4G LTE includes select cities in Iowa, Wisconsin, Maine, North Carolina, Texas and Oklahoma, including some of U.S. Cellular’s leading markets such as Milwaukee, Madison and Racine, Wis.; Des Moines, Cedar Rapids and Davenport, Iowa; Portland and Bangor, Maine; and Greenville, N.C. U.S. Cellular is the first wireless carrier to offer 4G LTE in several of these markets. The next wave of market launches will be announced later this month.

“With 4G LTE speeds, you can quickly get what you want when you need it,” said Mary N. Dillon, president and CEO of U.S. Cellular. “This 4G LTE network builds upon our industry-leading network satisfaction and is the only one that comes with a valuable rewards program and other unique benefits like Overage Protection and Battery Swap that make our customers the happiest in wireless.”

The Samsung Galaxy Tab™ 10.1 is powered by Android 3.2 (Honeycomb) and has a 10.1-inch WXGA TFT touchscreen. It features superior multi-tasking capabilities, a video watching experience similar to TV and smooth graphics and responsive controls for faster gaming. Apps are downloaded faster on the sleek Samsung Galaxy S® Aviator™ smartphone that comes with Android 2.3.6 (Gingerbread). It has a 4.3-inch WVGA s-AMOLED plus touchscreen, 8 megapixel rear camera and front-facing camera for easy video chatting. Both devices will provide download and browser speeds that are up to 10 times faster than 3G and be similar to a cable Internet connection.

The 4G LTE network builds on the 3G data services that U.S. Cellular customers already enjoy on the carrier’s high-quality nationwide network. U.S. Cellular has the highest call quality and network satisfaction of any national carrier. For more information about the 4G LTE experience, visit uscellular.com/4G.

About U.S. Cellular
U.S. Cellular rewards its customers with unmatched benefits and industry-leading innovations designed to elevate the customer experience. The Chicago-based carrier has a strong line-up of cutting-edge devices that are all backed by its high-speed nationwide network that has the highest call quality of any national carrier. U.S. Cellular was named a J.D. Power and Associates 2011 Customer Service Champion and received PC Magazine’s 2011 Readers’ Choice Award. To learn more about U.S. Cellular, visit one of its retail stores or uscellular.com. To get the latest news, promos and videos, connect with U.S. Cellular on Facebook.com/uscellular, Twitter.com/uscellular and YouTube.com/uscellularcorp.