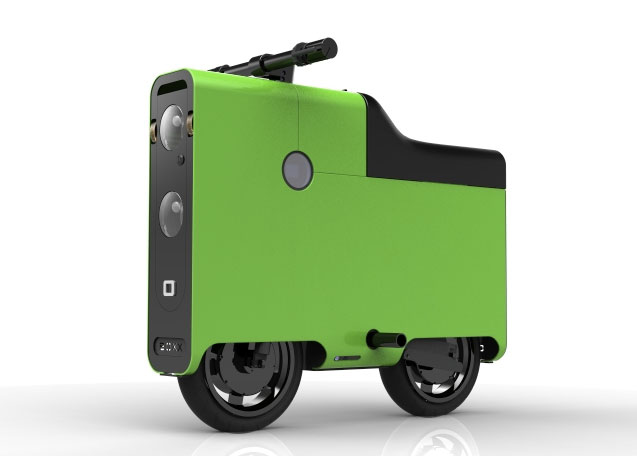 Ever wondered what would happen if a scooter and a suitcase would procreate? Unless you have a very active (and strange) imagination, probably not. Still, that is pretty much exactly what the Boxx Scooter seems to be. The oddly designed scooter is built by Oregon-based Boxx, is about 39-inches long, and promises to move you up to 80 miles (or 129 km) on a single charge. The scooter is also capable of up to 35 mph.  Unfortunately, strange suitcase-scooter hybrids apparently don’t come cheap, and this unique electric scooter runs in at just $4,000 for a base model. In fact, in order to get the boasted 80-mile range, you need to have the extra “Core2” system battery, which adds another $500 to the price tag.

If you don’t want one now, but might in the future, you can pre-order for a later production run and save $255 on the total cost of the bike. For most of us, the price is probably a turn off, but for those who really need a short-range traveling unit like this, who knows? I do know a friend that used to manage a small convenient station that lived only three miles from work and would ride a scooter back and forth. He looked a bit silly, but saved a fortune in gas versus a car. Of course he only paid around $600 for his old, beat-up scooter. The BOXX was first introduced just last week at the Portland International Auto Show, designed by founder Eric Vaughn. Before his days at BOXX, Vaughn actually worked in television as a visual designer for the series Stargate. If the BOXX looks a bit dorky (and bizarre), Vaughn says it’s meant to be that way, though he doesn’t specifically call it that. The idea of the unit is to attract a wider array of riders, including women and seniors. Vaughn is taking orders right now at his website.