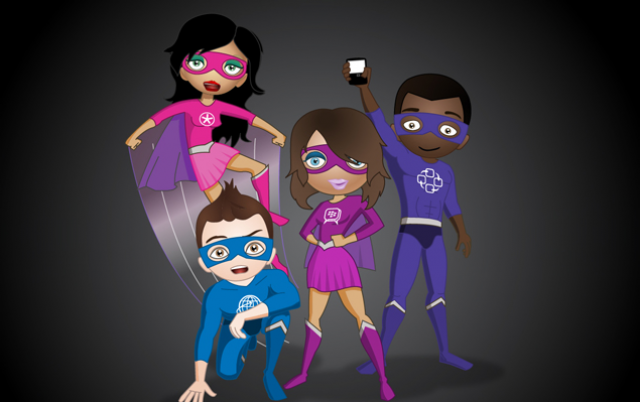 Oh, how the mighty have fallen. Research in Motion used to be the most corporate-centered smartphone company in the world, catering primarily to people in three-piece suits who had to look like they were busy all the time. Times have changed and now you want to be hip, cool, and connected. So, RIM is apparently revamping its company image.

Say hello to the four new mascots for Research in Motion, a group of four cartoon superheroes who are daring you to be “be bold” for 2012. This looks like it’s more in line with the Saturday morning cartoon crowd than it is with the financial blokes on Wall Street. The four cartoon characters are meant to embody four types of BlackBerry users.

GoGo Girl is the achiever, “saving the day with a brilliant strategy, a smile or a spatula.” Justin Steele is the advocate, “always ready to stick up for his friends.” Trudy Foreal is the authentic, “not afraid to call it as she sees it.” And Max Stone is the adventurer, “able to jump out of a plane.” RIM held an informal survey to see how their users broke down and 31% self-identified as achievers, followed by 27% adventurers, 24% advocates, and 18% authentics.

I guess it’s good that RIM is going in a bold new direction, since the old direction was heading straight to the poor house, but I’m not sure this almost kid-centric approach is really what they should be doing.