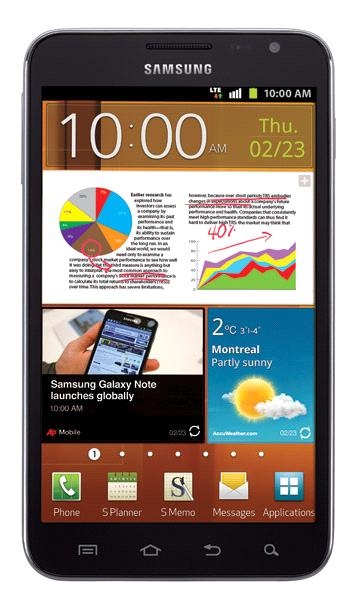 You might remember my little hands-on session with the Samsung Galaxy Note and you may be wondering when you’ll be able to have one of your own. Now it has been confirmed by both AT&T in the US and Rogers in Canada that the respective carriers will be launching the 5.3-inch Android “phablet” in February.

On the AT&T side of the equation, they’ve formally announced a launch date of February 19th for the phone/tablet and it’ll sell for the expected $299.99 with a qualifying two year contract. They’re starting pre-orders this weekend with the first batch of deliveries starting on February 17th. You’ll have your choice of carbon blue and ceramic white.

For Canadians, Rogers isn’t being quite as specific, merely saying that the Galaxy Note will come to Rogers “in February.” The Rogers Reservation System has the Note listed, so you can add yourself to the pack and wait for the LTE-equipped smartphone that way. Best Buy has apparently narrowed it down to the February 14th launch date, not only for Rogers, but for Bell and Telus too. We’re hearing a $250 price point with a 3-year contract is likely.