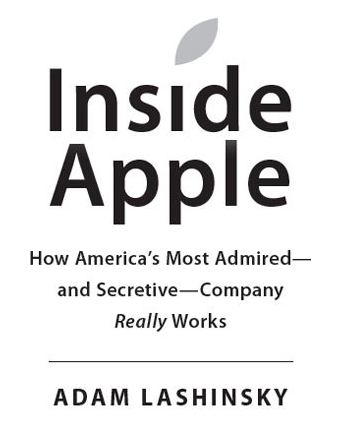 Lashinsky’s book offers a very unique look inside Apple, the book sheds much-needed light on how Apple truly works and what goes around on Apple’s campus.  Apple is admired around the world for the iStuff it creates, and it is known around the world for being the most secretive as well.

Never before have we seen anything published that shows what goes on under the covers and behind the glassy walls of cupertino’s HQ in such great detail. Lashinsky’s book offers inside scoops on how Apple does what it does. For example: Lashinsky reveals how Apple hires new employees into fake projects just to test the newbie’s trustworthiness. That is just tip of the ice-burge, the book reveals a whole lot of other shenanigans that Apple gets into and how Apple uses many different  techniques to be the best at what it does.

For new recruits, the secret keeping begins even before they learn which of these building they’ll be working in. Despite surviving multiple rounds of rigorous interviews, many employees are hired into so-called dummy positions, roles that aren’t explained in detail until after they join the company. The new hires have been welcomed but not yet indoctrinated and aren’t necessarily to be trusted with information as sensitive as their own mission. “They wouldn’t tell me what it was,” remembered a former engineer who had been a graduate student before joining Apple. “I knew it was related to the iPod, but not what the job was.” Others do know but won’t say, a realization that hits the newbies on their first day of work at new-employee orientation.

Inside Apple is a great read for anyone who has always wondered what magical powers are behind Apple and how it maintains to be a company both successful and admired around the world.

Here is something you should check out for sure. Below is a 49 minute video interview of Adam Lashinsky the author of Inside Apple.