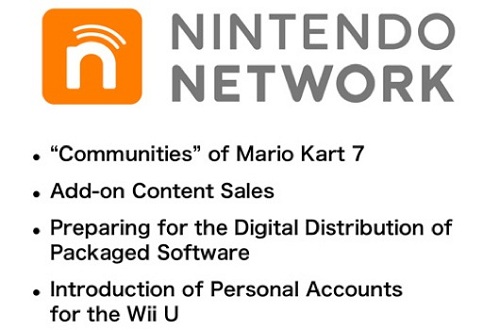 For those of you who are wondering about that “Nintendo Network” logo which appeared on a dummy box for Theatrhythm Final Fantasy, it’s certainly a reality and it has now become official. The Nintendo Network is the new name for the company’s online service on the 3DS and it will also be available on the Wii U after it arrives late this year.

The new service will be different from their existing Nintendo Wi-Fi connection services. According to company head honcho Satoru Iwata, the network will offer “competitions and communication among users, as well as the sales of digital content“. They are planning to offer retail games for sale via digital download and add-on content will be available as well.

As for the Wii U, the service will enable multiple personal user accounts per system, which will finally end their policy of tying software purchases to a single system.

It’s certainly a good thing that Nintendo is finally thinking seriously about the internet. What do you think?