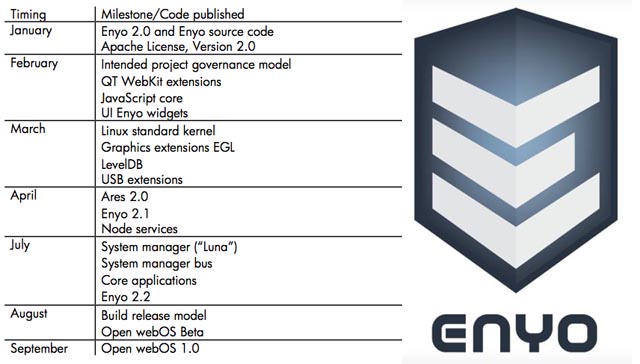 We had previously thought that the webOS platform died alongside the firesale of the HP TouchPad, but then the company gave it  new life when it announced their open source initiative. HP is now making good on its earlier promise by officially announcing Open webOS 1.0, the completely open source version of the webOS platform that powered the TouchPad, Pre, Pixi, and Veer.

To be fair, the open source Open webOS 1.0 isn’t exactly ready for primetime yet, but HP is dedicated to it. The current timeline calls for a completion of the open source project by September, but there will be updates along the way that will get you that much closer to the final product.

Going along with this development is the release of Enyo, the application framework that was used with webOS 3.0 and the HP TouchPad. That’s available to devs and hackers right now. In fact, a complete refresh called Enyo 2.0 is also in the works and it will not be tied to Webkit at all. This means that developers can create apps that are fully browser-independent, working just fine in everything from IE to Firefox to Chrome. For Open webOS 1.0, they’re also making a switch to a standard Linux kernel, not unlike what you get with Google Android.

Check out the proposed timeline above. While the beta builds for devs will get rolled out every month or so, regular end users won’t get their official hands on a version of Open webOS 1.0 until “late summer.” That may include webOS devices beyond the TouchPad too, like the Pre, Pixi, Veer series and who knows, maybe a TouchPad Go.