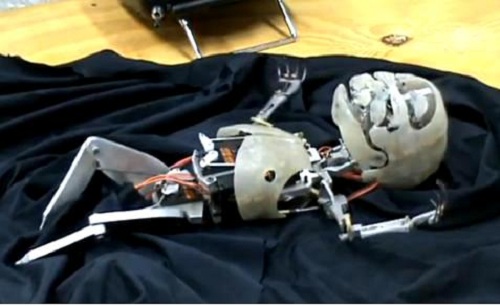 You might have seen a few robot babies before. But this new creation is creepy and is going to disturb you a bit. If you found the above picture freaky, we encourage you to stay away from the video.

But the work done by professional animatronic creature designer Chris Clarke is quite impressive. The robot baby has been designed to behave just like a human baby (it does too) and it is meant for an unnamed UK soap opera. If you are wondering why there is a need for that, you just have think about the number of hours a human baby will have to endure the set lights in a TV studio.

The robot baby will have no problems with the light and will also be more obedient and no feeding bottle needed as well (though a real baby won’t freak you out).

And this is also not the first time that Clarke has worked on infants. In the second video, which shows a lot of his works, you will see what we are talking about if you skip to the 4:45 minute mark. He also created a puppet horse which was used in Steven Spielberg’s “War Horse”, which allowed the shooting of some scenes that could bring harm to a real horse.

Animatronics can be very useful this way. People can avoid harming real humans and animals in the name of entertainment. But that does not keep the video below from not being creepy. Check out the un-skinned baby and leave your thoughts below.