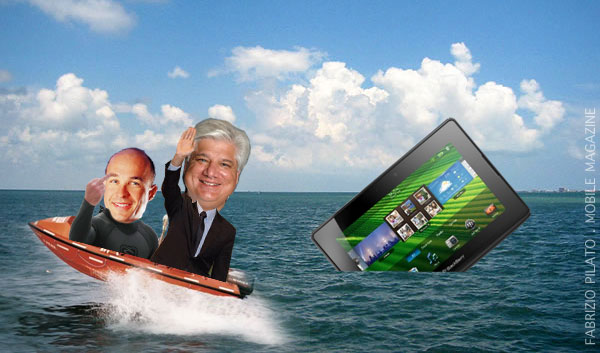 Research in Motion had a tough 2011, their troubles are far from being over, and it has become such daunting task to lead the company in its current state, that co-CEOs, Mike Lazaridis and Jim Balsillie have finally jumped off the sinking ship.  The company has announced the two are stepping down, while Thorsten Heins, currently RIM’s COO of Product Engineering, will take over as the new CEO; Heins believes he can stop the ship from sinking.

Both Lazaridis and Balsillie, who have been heading up the company for two decades, will still be on board though. Lazaridis will stay as vice chair of the board while Balsillie will be an ordinary director.  And they seem to be fully confident that Heins will be able to make things right. But it’s definitely not going to be easy for him.

Just to refresh your memory, the BlackBerry PlayBook turned out to be a painful experience for the company after it was released a couple of months back. They had to go through all sorts of trouble, including software glitches, price drops, massive competition, lack of apps and the list goes on. The big outage that came in October and the lawsuit over the use of BBX added to the agony. And the company’s market share is going down as iOS and Android are becoming more and more popular.

But still, Heins has high hopes. He believes that “everything is in place for the company to grow”. One of the first steps that he will be taking as the company’s head will be hiring a Chief Marketing Officer to make sure that the BlackBerry brand remains popular.

Check out the video to learn more about Heins’ ideas.