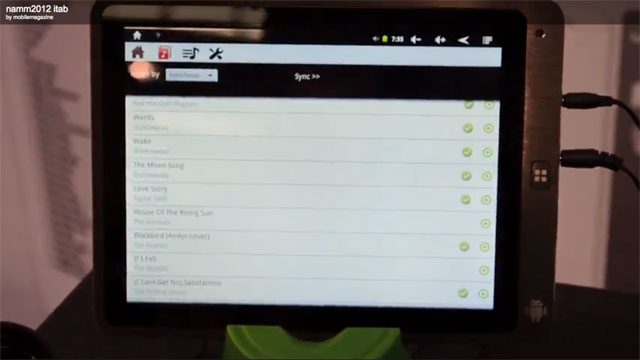 i-Tab has been at it for several years now, we saw the company first announce their portable guitar tab and songbook device back in 2010. At NAMM I had the opportunity to speak with i-tab CEO Andy Hirst who gave me the rundown. It’s been a hellish 2 years trying to secure the right hardware partner and work out the glitches, i’m told its still shipping soon. It looks like the companies Android guitar tab software will be out first, as it’s set to be released within the next couple weeks. The iOS version is still being hammered back and forth with Apple, so that could be months away. I know what you’re thinking, we’ve heard it before, but really, i-Tab is on the way guys.

i-Tab is also in talks with large device manufacturers who will make their tabs available as bundled software to target a younger audience. Musicians can get involved too as the company is going to pay you to submit tabs to their tab store, the program is called tabs4cash. End users can buy tabs at .40 a pop.

Now since i’m going to be buying an acoustic guitar in the next couple days, I have decided to hold out on learning until Andy sends an i-tab my way. I will document the process and try to learn strictly from the i-tab alone, then the rest of you out there on the fence about learning guitar can see for yourself if its worth taking the plunge. The i-tab to me looks a little small and might be difficult to see the chords, but I will have to wait and see. The i-tab tablet should address that concern since the larger screen definitely helps.