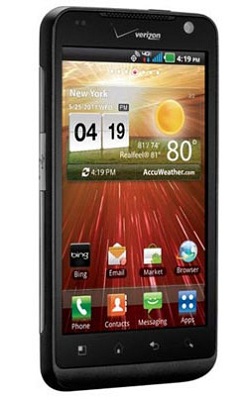 There are already many LTE devices on Verizon’s network, and now they have added one more. The LG Spectrum is now available on sale from the carrier. The smartphone, which is aimed at the mid-range market, is coming with high-end specs including a beautiful HD screen.

The Spectrum features a 1.5GHz dual-core Snapdragon S3 processor, an 8 Megapixel rear camera capable of recording 1080p video, a front facing 720p camera for video calls, 16GB of storage, and 1GB of RAM, and an 1830mAh battery is included in the package.

But it’s coming with Android 2.3 and no hints regarding an upgrade to Android 4.0.  It features Bluetooth 3.0, but Bluetooth headset users would probably prefer BT 4.0 as it consumes much less power in standby mode.

The device’s main attraction is its large screen protected by Corning Gorilla Glass. Although it’s not as big as the one on the Galaxy Note, the 4.5 inch 720p IPS display might just be enough to attract you. And of course, the LTE device will take advantage of Verizon’s high speed network.

We are expecting to get the device soon for a hands-on experience so that we can judge it fully. But we encourage you to pay a visit to your nearby Verizon store to take a peek at that screen for yourself. And do let us know how you felt.