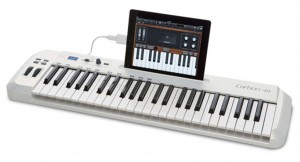 How does the idea of a USB MIDI controller that works flawlessly with the iPad sound? This is exactly what Samson’s Carbon 49 USB MIDI Controller is all about.

The unit is designed from the ground-up with iPad in mind and features an iPad stand, and is easily coupled with your favorite MIDI apps via Apple’s Camera Connection Kit. The Carbon 49 can even be directly powered by your iPad, for a fairly mobile solution.

Of course I would imagine this sucks down the battery pretty fast, though I have no official information on how much battery-power the MIDI keyboard takes.

ION ANNOUNCES PHONE STATION PLUS, SPEAKER AND CONFERENCE CALL ENHANCER FOR SMARTPHONES</strong>Hauppauge, NY – (January 19, 2012) –Samson’s Carbon 49 USB MIDI Controller makes musical performance and production accessible to everyone. For seasoned musicians and young creators alike, the Carbon 49 offers versatile, yet easy-to-use features in a compact, lightweight controller that’s well-suited for the stage and studio.The Carbon 49 offers players a semi-weighted keyboard comparable in feel to that of pro-level instruments. Its 49 velocity-sensitive keys allow you to accurately capture the full dynamics of a performance. In addition, the Carbon 49’s dedicated Transpose and Octave buttons, as well as its classic Pitch Bend and Modulation wheels, allow you to expand the keyboard and enhance your overall musical expression.

Take control of your music software with the Carbon 49’s assignable data encoder and volume slider. For easy editing, players can use the Shift key to adjust up to 14 performance-related control parameters. Also, the Carbon 49’s 3-digit, 7-segement LED displays the behavior of every function in real-time. For added versatility, the Carbon 49 includes traditional MIDI Out, sustain pedal input and USB connections.

Designed with the iPad in mind, the Carbon 49 features an integrated iPad stand and can be used with your favorite MIDI apps via Apple’s Camera Connection Kit. The Carbon 49 can even be directly powered by the iPad. In addition, the Carbon 49 comes with Native Instrument’s Komplete Elements software, which offers a vast range of instruments and effects for modern music production, composition and sound design for your desktop Mac OS X or Windows.

With Samson’s Carbon 49 USB MIDI Controller, it’s never been easier to get the most out of your music software.

About Samson Technologies:
Samson Technologies began in 1980 designing wireless microphone systems. Today, we are an industry leader in both consumer and professional audio with three notable brands: Samson, Hartke and Zoom. Over 250 of our products are sold and distributed in over 130 countries around the world.