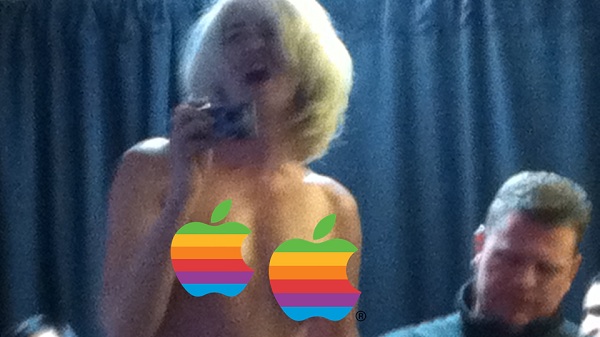 If you clicked on this post hoping to see a bit of iBoobie, sorry, it’s not going to happen. Matt Bomer, the hero in White Collar, would have never guessed about what was going to come at him during a Q&A with his fans at the SoHo Apple Store. Well, he didn’t and was not prepared for the stoned lunatic who stormed the stage, naked.

Bomer was promoting the third season of White Collar at the store when he had to endure the boob flash, thoughts (good or bad) about which are definitely going to be in his wildest dreams for quite some time.

This is what a shocked Apple Store customer who was present at the live show had to say on the matter via Tumblr:

“Went to go see Matt Bomer at the Soho Apple store – he’s promoting the second part of the third season of White Collar, premiering tomorrow. Cristen and I sat in the back on the side. This older blonde woman with a drawn on mustache sat next to Cristen, and she REEKED of marijuana. Midway through the thing, she TAKES OFF HER TOP, stands on a chair, completely topless, and starts screaming about how she is the naked paparazzo and how we should all go visit her website and see her drag queen friends perform blahblahblah. Cristen was hiding in my lap because this lady was right next to her, and Matt Bomer had this insanely giddy grin on his face and is squealing THIS IS THE BEST THING TO HAVE EVER HAPPENED IN MY CAREER!!!!!!!! He also proceeded to bring it up at every chance he possibly could throughout the rest of the night. ONLY IN NYC, MY FRIENDS. ONLY IN NYC”.

No word on what happened to the stoned woman after the act. But we do know that some of you out there have found one more reason to pay a visit to the nearest Apple Store.