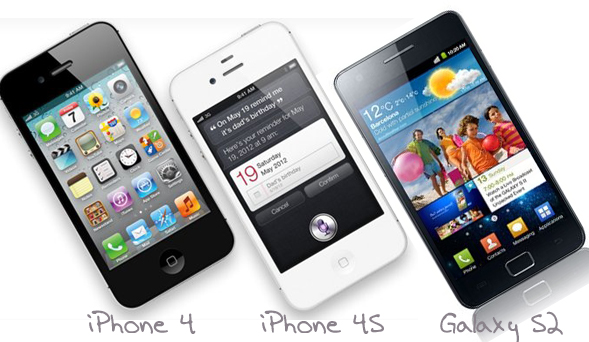 Canaccord Genuity, a markets research company, has completed their report on best selling handhelds of Q2 2011. This report has found its way into BGR hands, and here is what we can make of it. 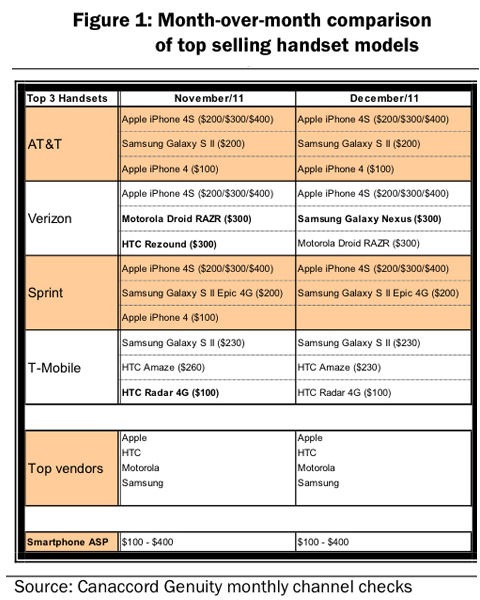 The undisputed leader of all sales from all carriers that offers the iPhone is the iPhone 4S for last two months of 2011. Who would have thought otherwise?  More interesting and telling is the struggle for second place. The Samsung Galaxy S II looks like the leader for the second spot, except for Verizon where Samsung’s Galaxy Nexus took the position in December 2011, while in November 2011 it was Motorola’s Droid RAZR as Verizon’s second big selling phone.

T-Mobile doesn’t offer the iPhone 4S, so their best selling phone is the Samsung Galaxy S II. But it’s easy to imagine that if they could cater iPhones to their customers, the iPhone 4S would have been the leader with T-Mobile, too.

Another interesting feature in these trends is the fall of original iPhone 4 popularity which can be seen on a full span of six months research. Can Samsung’s Galaxy S II overtake iPhones one day? I don’t think so. Samsung is still the fourth in the race for the best vendor prize,  after Apple, HTC, and Motorola. Even if Samsung is on the rise now, who knows how much time it will take them to beat HTC? And if it will be quite rather long wait, then there will be the iPhone 5 available by then which will start a totally different game.

Carriers which are piggybacking on “big guys” bandwidth didn’t make it into this report. But volumes of their sales of handhelds most probably cannot really change the picture.