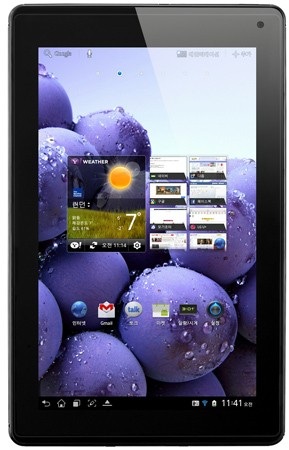 You will get an 8 megapixel camera on the rear and a 2 megapixel front facing shooter for satisfying all your video chatting needs. And it is the first tablet to support SD cards of up to 32GB.

Other features include HDMI connectivity, DLNA, Smart Movie Editor, Wi-Fi, and it will be powered by a 6,800mAh battery. But the only disappointment is that it’s coming with Android 3.2 and no hints regarding the arrival of Ice Cream Sandwich. That might turn off quite a number of people, but that display and LTE support might be enough to lure many others.

The tablet will be available initially in LG’s home territory of South Korea before making its way to markets around the world. No word so far on pricing, but we will let you know as soon as there is an announcement.