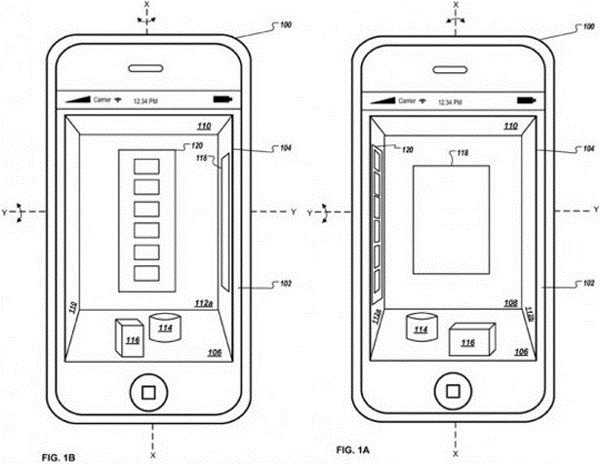 Sure, can talk to your iPhone with Siri. But what if you could wave to it as well?  It appears like you will be able to do just that sometime in the future. From the latest info available via a patent application from Apple, we have got hints of a new 3D GUI for iOS mobile devices.

Just in case you aren’t with Apple’s 3D intentions, they started to explore the world of 3D GUIs back in 2009. It was in 2010 that we saw 3D GUI making its appearance on iOS devices.  Now, they are going even deeper into the tech. Their latest unveiled patent involves controlling a 3D interface using motion-based gestures.

Now, we don’t have say too much about the act of controlling a device using gestures. Microsoft’s Kinect is a very good example and new products have already arrived. But all those are meant to be enjoyed from the comfort of your home in front of a television with a big screen.  Remember that Kinect-like technology we saw 2 CES’s ago? Well, that’s sort of what we’re talking about here.  How would a  3D GUI work you ask? On an iOS device such as the iPhone, which comes with a small screen size, Apple will be making use of proximity sensor arrays. The readings from the sensors are translated into movement on the screen. Your hovering gesture will be detected and the UI will respond to it moving the objects within the 3D GUI.

Do you think that bringing 3D GUI to an iOS device will be a good idea? Or would it just make you look a little crazy?