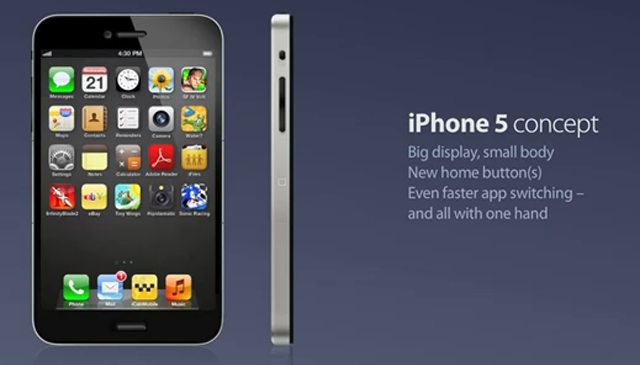 The iPhone has always had just the one home button and that button has always been placed underneath the touchscreen on the front. The latest concept for the upcoming iPhone 5, however, takes an entirely different approach. It includes two home buttons placed along the sides of the iDevice instead.

Coming by way of AppAdvice, the newest iPhone 5 concept isn’t a huge departure in design from previous iterations, but you will notice that the round home button underneath is gone. Instead, there’s a “home” button on either side of the device where you finger and thumb would be anyhow. If you squeeze both, you get the same as pressing the single home button as before.

What makes things a little more interesting is that you can press each side home button individually. The side buttons could be used for quickly switching apps, going back and forward, paging through an e-book, and all sorts of other functions, all without having to lift a finger to place on the touchscreen. It’s an interesting idea, but I’m not convinced it’s one that Cupertino will adopt. After all, they’re all about gestures these days.