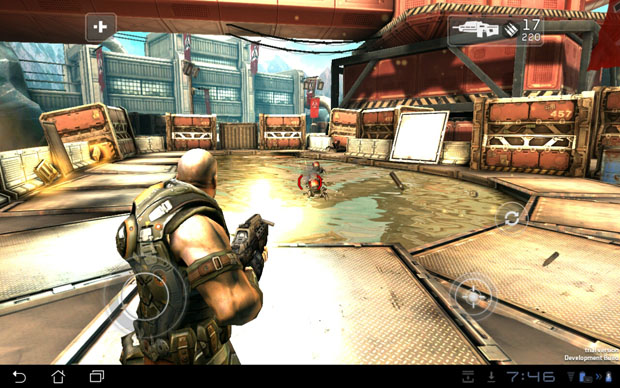 The ASUS Eee Pad Transformer Prime continues to amaze us. At CES 2012, an avid gamer shows his prowess with Shadowgun running flawlessly on the Tegra 3 powered tablet. Connected to a large screen via HDMI and controlled by an ordinary Xbox 360 controller, there’s really no telling the difference. It takes a docking station to connect the controller and external HD TV, but one thing is important to notice here: unlike many tablets with HDMI output ports, the Transformer Prime displays the gameplay on two screens simultaneously.

Serious gaming on Android tablets without dedicated hardware gaming controllers is quite problematic. Many gamers don’t really like touch controls that may be rather limited either in their range of available options, or actions, or in responsiveness to urgent touches. Xbox controllers are among the most popular gaming sticks, and their inclusion into an arsenal of Transformer Primes is a feature that many gamers will love.

As a user of the ASUS Eee Pad Transformer Prime, you can get Xbox 360 controller for as little as $30…$40, so it might be a very valuable addition. What would be a priceless addition to this gamer’s rig is adding a Kinect gesture sensor to it.

By the way, attempts to make Kinect work on Tegra 2 Android tablets have already been done.