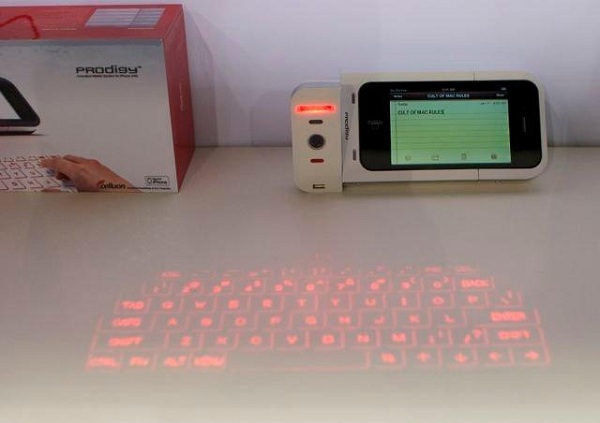 CES is not only about smartphones, Ultrabooks and tablets (although all those are what attract us), but also about a lot of upcoming accessories. The Celluon Prodigy is a new battery case for the iPhone 4 and 4S with an intriguing concept.

Obviously, the first thing to say about the Prodigy is that it can be used to charge your iPhone. What sets this new case apart from all the other iPhone battery cases is that the Prodigy can project an interactive infrared keyboard onto any flat surface.

You will be able to type emails and messages on the infrared keyboard, provided your iPhone is propped up stably on a table or desk. It’s that simple. Although you might be managing to type fast on a virtual keyboard, the Prodigy might help you do it better. Or will it?

The prototype that is being shown off at CES has a lot of work to be done on it. First of all, the Prodigy’s infrared projector and attached camera (for detecting where your finger is when it cuts through the infrared beam and what key you are hitting) make it slightly longer. Although you can adjust with that, you might not tolerate the bigger problem.

Our guys at CES found out that the Prodigy was not good at telling what key was being hit. For example, just imagine you typing the word Duck and it ending up as something else, if you know what I mean.

Although the company’s reps said that it’s just a matter of getting used to the new keyboard, they also seemed to be finding it difficult to type. And it’s not because it’s a prototype, as their Magic Cube does the same thing for the iPad and we can’t say its better.

They will be releasing the case in the coming months with a price tag close to $189.95. About $100 more than most battery cases out there. Interested?

The concept is cool and might be paving the way for something awesome for the future. But for now, we recommend you to stick to the touchscreen.  Check out Prodigy’s predecessor, the Magic Cube in the video below.