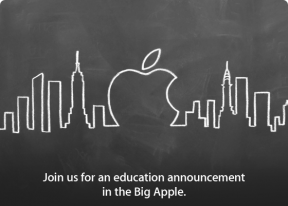 Amid all the excitement of CES 2012, one announcement has almost slipped unnoticed: Apple has announced an education event that is to be held at Guggenheim Museum, New York, on January 19th.

As TechCrunch noted, last time Apple was spotted showing an effort in the field of education was last August, when the $999 iMac for educational purposes was presented. However, this announcement is not about Apple’s hardware, it’s certainly about their iBooks and textbook publishing.

Reports have it, this one won’t be a major announcement, or a “Big” one. In any case, MacWorld experts sat around their round table and discussed what might be some topics at this Apple event. Here are some highlights of their discussion:

All in all, Apple has formidable opponents in their struggle for a slice of the educational market, Amazon Kindles (Fire’s, for example) look like they are in much better shape due to their low cost. Will this Apple event at Big Apple produce something big? A new tablet for students perhaps? We’ll see.