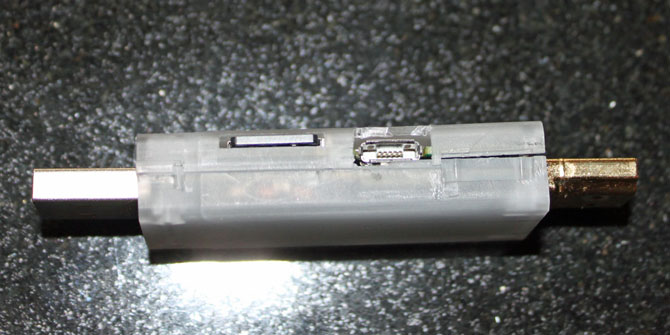 We covered an earlier version of this interesting dongle-like miniature computer back in November, now its smaller and more versatile and was featured at Showstoppers at CES 2012.

This time the mighty little dongle shows how good it can run Ubuntu and Android 4.0 on external monitors, or just using the laptops’ displays to demo its prowess. Newer version of FXI Cotton Candy has got an additional micro USB port and switchable Bluetooth to augment two full sized USB ports that existed in previous prototype iterations. Its connectivity is certainly improved: Cotton Candy can plug into a monitor, keyboard and mouse and power source. So, you get a full-fledged computer on your hands weighing about 21 grams.

Ubuntu boots fast enough and looks quite good, but running Android 4.0 with a keyboard and mouse in place of a touch-screen interface feels a bit clunky. However, for web browsing and other traditional tasks Cotton Candy works just fine, and 1080p video also played without issue.

Cotton Candy runs Ice Cream Sandwich, but as shown it’s more like a work-in-progress than finalized Android 4.0. FXI developers promise improvements that can make Ice Cream Sandwich run smoother. Improved connectivity has led to an interesting demo of the Cotton Candy feeding two screens simultaneously. Developers work on getting different content on these screens that can be manipulated independently, and then it will be quite spectacular way to use this Cotton Candy. Additionally, two Cotton Candy sticks can feed a single display with two different windowed working environments.

Such virtualized ICS environments for your laptop is just one useful option to operate Cotton Candy. FXI’s idea is that as hardware continues to evolve, devices like smart phones are getting old and underpowerd too fast. While that might be fine for a smartphone that gets upgraded every year or two, it doesn’t work well with TVs, car computers, or other “smart” devices that may be used for 5-10 years. Here’s where a Cotton Candy stick can help, provided you can get them as new upgrades more often than TVs and car computers.

For operating in cloud-oriented environment, Cotton Candy becomes handy too, as its user could carry one device around that has access to all the apps and data that user wants from the cloud, and his interface stays the same no matter what “host” computer’s display is used.

At the moment, there’s no indication of what to expect from the price when this prototype may hit a product manufacturing stage. Estimates indicate the price will be below $199. Which one day with Cotton Candy production volume counting in the millions, may easily be lowered to about $25 or so.