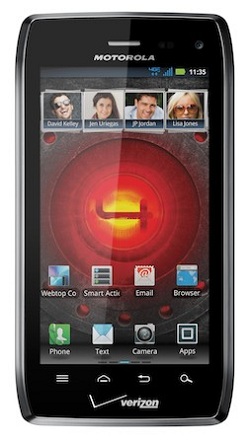 AT&T looks to be in a good position to attract quite a number of customers with their newly announced Android and Windows devices with LTE capabilities. But it’s not going to be easy for the carrier as Verizon has had a head start in deploying LTE in the US and has now announced new 4G LTE-powered smartphones, the Motorola Droid 4 and the Droid RAZR MAXX, at CES.

According to Motorola and Verizon, the Motorola Droid 4 is the thinnest 4G LTE QWERTY smartphone on the market. The handset measures in at 5 by 2.7 by 0.5 inches. It’s no Droid RAZR and definitely not the thinnest handset on the planet, but we have to keep in mind that the device comes with a 5-row keyboard which slides under a 4-inch qHD display.

The keyboard features sharp-looking, edge-lit keys, and the display is coming with “scratch- and scrape-resistant” glass.

The device also features a 1.2GHz dual-core processor, 1GB of RAM, 16GB of internal storage, a microSD card slot, and an 8 MP camera which is capable of recording 1080p video.

The only disappointment is that the device will be running Android 2.3.5 Gingerbread, instead of Android ICS. Motorola has promised that the upgrade will arrive sometime in Q2 of this year. The late arrival of the latest OS is most probably because of Motorola’s relatively heavy UI layer and their Webtop mode and all. Moving all that to ICS will take time.

The Droid 4 will hit store shelves sometime in the coming months, but there have no announcements regarding the price tag.

As we told you earlier, the DROID RAZR MAXX is also headed to Verizon and one of the main features of the device is that its battery lasts 21 hours on a single charge. And the carrier also announced that their DROID RAZR, black and white models of which are on sale at present, will be available in color purple and its price will be dropped to $199.

Verizon Jetpacks, two global ready 4G LTE mobile hotspots, have also been announced. With each Jetpack, you will be able to connect up to 10 Wi-Fi enabled devices for sharing Verizon’s network. The Jetpacks come with an OLED screen and interactive keypad which will allow you to manage the connections. With the Jetpack, you will be able to get online in more than 205 countries. No word on pricing at the moment.