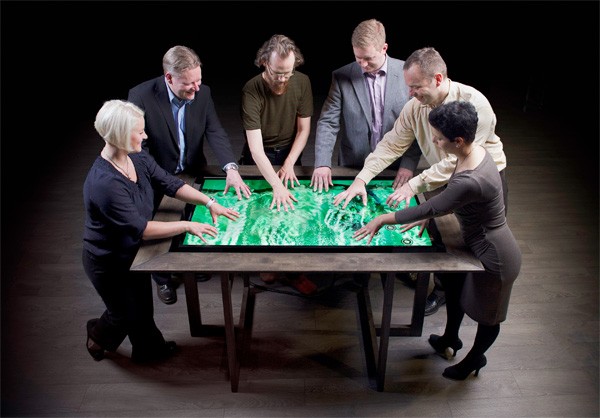 Microsoft’s Surface table certainly isn’t the only multi-touch table-styled LCD technology out there, as further proven by the new MultiTouch 55-inch Cell MT550W7 display that will be demonstrated at CES from Tuesday through Friday this week.

The demonstrations will include both the released product running Windows 7 embedded, and a prototype of the Windows 8 Developer Preview experience on the giant table display. An actual upgrade path to Windows 8 will exist sometime later in 2012.

The MT550W7 runs on an Intel Core i7 processor, and is four inches deep on the sides and eight inches deep in the middle. The real amazing part of the technology though, is that it has an unlimited number of touch points on the display.

This massive table-like PC will include support for industry’s widest range of development tools such as MultiTouch Cornerstone software development kit, and Microsoft’s Surface 2 SDK, and all TUIO-compatible tools. An external computer with Windows, Linux, or Mac OS can also be used to connect multiple cells into even-larger installations actually.

Such technology will ultimately be most useful in places like museums, retail locations, and perhaps even trendy restaurants and bars. Of course such technology doesn’t come at a very low price, though specifics regarding the actual retail price have yet to be released.