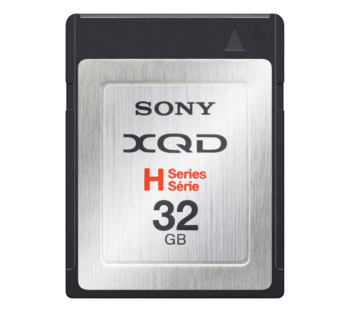 Most devices these days sure use smaller (and slower) SD Card technology, but high-end DSLR cameras from Canon, Nikon, and Sony still keep CompactFlash alive for performance and capacity reasons. The new XQD format as a variation of CompactFlash and follows in the same direction, trying to keep ahead of SD by borrowing the PCI Express (PCIe) high-speed serial communications link interface from computers. Using the PCIe interface, Sony’s XQD memory cards are capable of achieving a stable, continuous, fast shooting and recording of very large RAW images as well as deliver blazing fast data transfer rates of up to 1Gbps. This translates into about 125MB/s, write and read. Sony believes this could support 100 FPS RAW image captures.  Nowhere near the military’s 1.8 Gigapixel imaging system at 10FPS, but hey, we’re not the military are we?

To make sure you are well equipped right from the get go, Sony has also introduced a USB 2.0/3.0 compatible XQD card reader, a $44.99 MRW-E80 card reader model that plugs in with USB 3.0. Then, there’s also a $44.99 QDA-EX1 adapter that plugs into laptops with ExpressCard slot.

Pricing for XQD cards are QDH16 ($129 USD) and QDH32 ($229 USD). XQD will be able to exceed 2 terabytes capacity eventually, according to the the CompactFlash Association, which developed the format.

XQD will also be able to exceed 2 terabytes capacity eventually, according to the the CompactFlash Association, which developed the format. Second and third generation versions of PCIe double and quadruple transfer speeds to 250 MBps and 500 MBps. The initial cards will use the first generation interface, but PCIe provides for backward compatibility so that newer devices will be able to use older XQD cards.