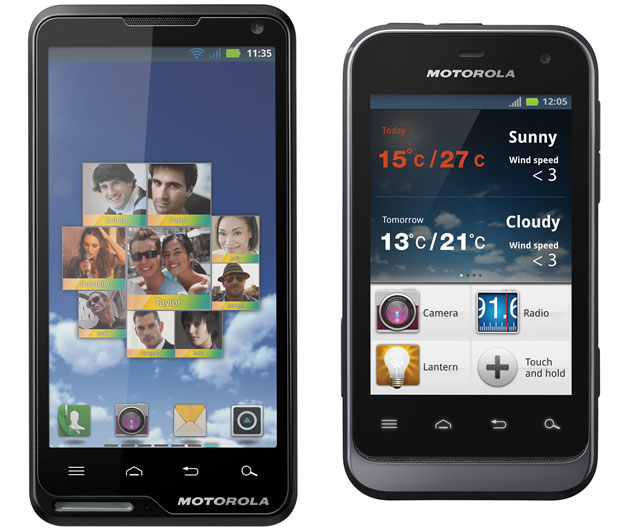 Motorola Mobility has announced two new smartphones to launch this spring, the Motoluxe and Defy Mini. Both devices will be available in China, Europe and Latin America, with no word on U.S. launch. The larger Motoluxe will feature a 4-inch display, an 8-megapixel rear camera, a 1,400 mAh battery and a VGA front-facing camera. Branded by Motorola as being “life proof” DEFY MINI is water resistant, and dust and shock proof. This smaller, rugged device features a 3.2-inch display with a 3-megapixel rear camera, a 1,650 mAh battery and a VGA front-facing camera. Both devices will be on display at next week’s Consumer Electronics Show (CES 2012) and will be running Android 2.3 with a variation of Motorola’s custom MotoBlur skin that apparently has got a new monicker: “MotoSwitch”.  MotoSwitch is focused on a user’s social graph. The more frequently a user communicates with someone, the bigger their icon becomes on the homescreen widget.

‘No matter what device you choose, Motorola’s MotoSwitch user interface changes the way you manage your life. With MotoSwitch, your smartphone learns who you talk to and which apps you use and keeps all of that information front and center. The Social Graph feature gives you easy and fast access to the people who really matter. It learns who’s most important to you and uses that information to populate the home screen. The more frequently you communicate with someone, the bigger their icon becomes. The Activity Graph gives you quick and easy access to your favorite apps, automatically changing to reflect the apps you use the most.

Motoluxe also offers another interesting feature: a lanyard slot that has a lighting effect, such as you can see when you’ve missed a call, received a text or have an email waiting for you.

No pricing for these phones was disclosed just yet.