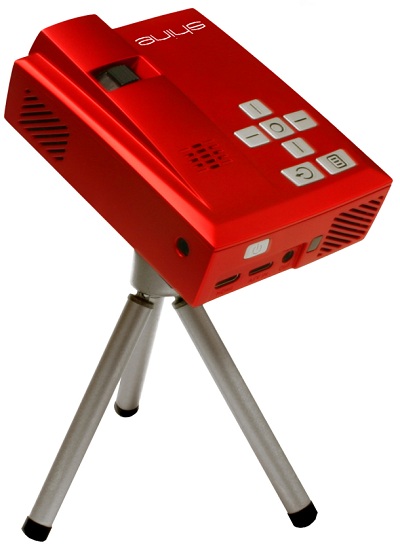 Most pocket projectors out there are not at all impressive, but it’s certainly a good thing that some picos are being brought out with improvements such as better picture quality. The latest micro-projector from Velocity Micro, the Shine Projector, is claimed by its makers to be the smallest HD-capable projector.

The new projector is definitely small. It will fit in a pocket, a large one though. The Shine comes with a native resolution of 1,280×768 pixels (WXGA). Although that is far from full 1080p resolution, Velocity Micro is promising that it will accept a 1080p signal.

The Shine, which measures in at 4 inches on its longest side and weighs 9 ounces, makes use of Texas Instruments’ DLP technology with LED illumination. And you will have to plug it into a wall outlet as it does not come with a built-in rechargeable battery like many other picos.

Other strengths include a 2,000:1 contrast ratio and a throw ratio of 1.4:1, and 300 lumens of brightness suggests that it is significantly brighter than the earlier, smaller pico projectors.

It can be easily connected to any compatible media device such as PCs, smartphones, and tablets via a mini-HDMI connector. You will also get full USB connectivity, and an audio-out jack, and it uses just 23 watts of power.

The Shine Projector will be shown off at the upcoming CES. No word yet on when it will be available on sale or exact pricing, but we do know that it will have a price tag less than $400.