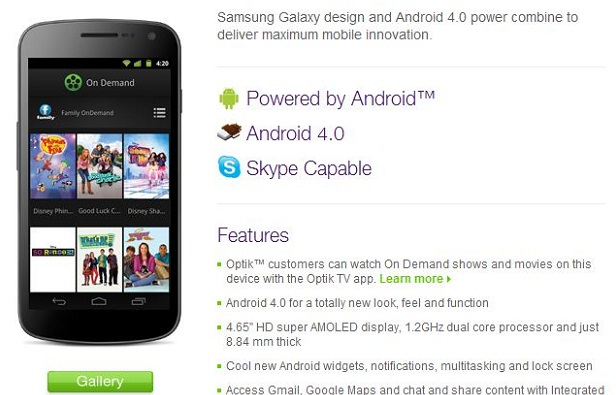 You don’t need to align yourself with Virgin or Bell to get a fresh taste of Ice Cream Sandwich in Canada. The universe is expanding its reach and the Samsung Galaxy Nexus smartphone will be officially launching with Telus Mobility on January 13. That’s next Friday, in case you don’t want to look at a calendar.

This announcement hardly comes out of left field. We already knew that Bell/Virgin would have about a month’s worth of exclusivity on the new Android phone during the holiday shopping season, but the other major carriers would get their shot at ICS in January. While it was previously rumored that Rogers and Fido would get the Galaxy Nexus on January 10 (Tuesday), it looks like they’re getting bumped to the same release date as Telus: Friday the 13th. Hopefully that’s not a bad omen.

While Rogers, Fido, and Telus haven’t made a formal announcement about the pricing for the Galaxy Nexus, we imagine that it’ll fall in line with Bell’s pricing scheme of $160 on contract and $650 straight up. At the same time, considering what we saw with the Nexus S before it, the competition between carriers might see some price adjustments for further enticement.