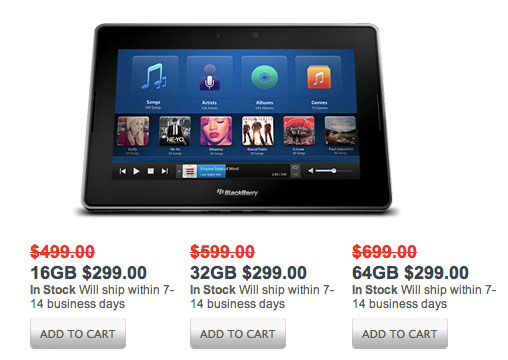 It appears like the PlayBook sales during the holiday season didn’t quite go as planned for RIM. In what seems to be a very desperate move, the company has started offering all models of the tablet with a price tag of $299 on their online store.

Earlier, the company set the beginning price point at $199 for the 16GB model. Now, both the 32GB and the 64GB PlayBooks are available for the same price as the 16GB tablet.

Although the tablet is not that cool when we consider the availability of applications and security features and all, the new deal appears to be a good one if you are already stuck with a BlackBerry.

But you better make it quick if you want to play with the 64GB version as that deal is the most attractive and it’s not known whether there are enough of them available and I couldn’t imagine them selling many 16GB models with this offer.

The price cut from RIM is certainly not a surprise. The company’s recent earnings report suggests that the PlayBook’s popularity is decreasing and the only way to make people interested in the flawed tablet is with a discount.

RIM will be offering the tablet for the new price until February 4. As you might know, the PlayBook OS 2.0 is scheduled to hit devices sometime in the coming month. The new PlayBook fire sale could be a planned attack to move as many units as possible into people’s hands ahead of the update.