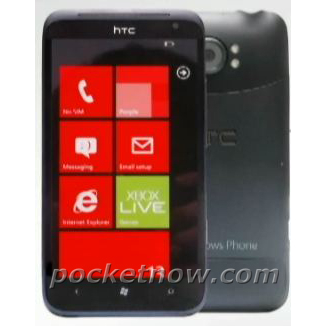 Recently Windows guru, Paul Thurrott, released information about a few Windows Phone LTE devices that will be shown off at CES 2012 in a few days.

One of these was the HTC Radiant.

You might notice that the Radiant looks a lot like the pre-existing HTC Titan, though there are some key physical differences. For one, the top of the phone wears a larger HTC branding and also has a bigger-looking front facing camera lens.

There are also some movements for the buttons and on the back there is a dual-LED flash that has been moved to the right side of the camera.

Right now the specifications are unknown but are likely to at least meet Windows Phone’s standard configuration requirements such as a 1.5GHz CPU, 512 MB of RAM, and the same sized WVGA screen of the Titan. We also do know that the phone will have LTE and a larger 4.7-inch display.

For now, the launch date remains unknown but we can take a few guesses.

According to Thurrott’s information, the LTE-capable Nokia Lumia ACE is due March 18, 2012, so this likely means that the Radiant could arrive according to a similar timeline.

At the very least I would expect this model sometime in the first half of 2012.