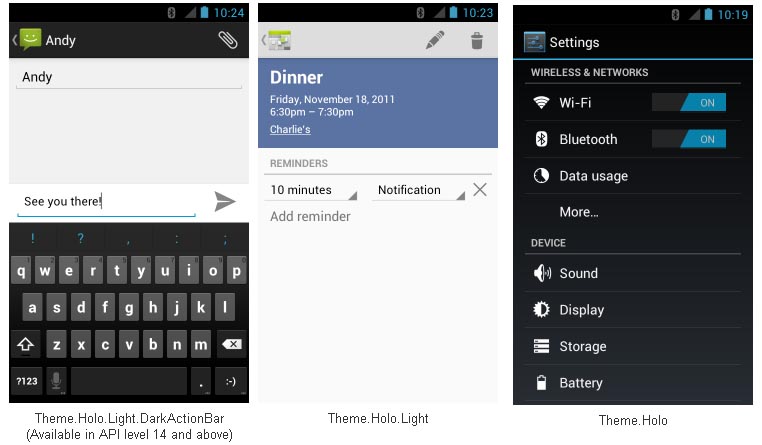 The official Google Android Developers blog has recently published a requirement that all manufacturers include the default Holo theme in their Android 4.0 (Ice Cream Sandwich) devices. It goes something like this:

Translating these statements from Googlese, it means that if manufacturers won’t comply to this requirement of inclusion of this compulsory Holo theming as default. In its turn, it means that instead of their own, quite incompatible with Android 4.0 theming (think about Samsung’s TouchWiz, HTC’s Sense UI, and others) such “fragmented” devices either won’t get a license for official Android 4.0, or at least won’t get access to Google’s Android Market and Google Apps. Or both.

There’s a plenty of discussion of how third-party app developers can still do well making their apps based either on Holo framework, or, with some streamlining, on modified 3rd party “theming” of a Sence UI sort. My take on these long-winded arguments about how good and useful 3rd party theming would be if based on Holo are totally missing the point. Google just takes the fight with fragmentation of their Android ecosystem to the birthplace of this fragmentation: device manufacturers and carriers. Sure,  official Android Developers goes as far as this:

“We have no desire to restrict manufacturers from building their own themed experience across their devices. In fact we’ve gone further to make this even easier. In Android 4.0’s API (level 14) we’ve added a new public theme family to complement the Holo family introduced in Android 3.0: DeviceDefault. DeviceDefault themes are aliases for the device’s native look and feel. The DeviceDefault theme family and widget style family offer ways for developers to target the device’s native theme with all customizations intact.

Just take it with a grain of salt. The real importance is: nolo Holo — nolo ICS to you.