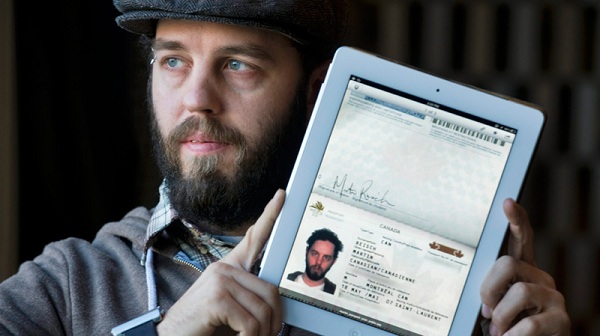 Forgetting the passport is certainly not a good way to start your journey into a foreign territory, especially if the country you are visiting is the United States. But Canadian Martin Reisch managed to gain entry into the US after presenting a scanned copy of his passport on an iPad.

According to the available info, Reisch was traveling to the US to deliver some Christmas gifts to his friend’s children. He might have been too excited about the matter that he forgot about his passport and realized about it only when he was about half an hour away from the border.

Rather than turning back and making a two-hour trek back to his home in Montreal to fetch his passport, Reisch decided to try his luck at crossing the border without the required documents, but with his iPad.

The tablet had a scanned copy of his passport which he had saved in it just, you know, in case.

The US border officer who was presented with the iPad and Reisch’s driver’s licence was reportedly slightly annoyed with the presentation, but was most probably full of Christmas spirit as he allowed Reisch to pass.

According to Reisch, “I thought I’d at least give it a try. He took the iPad into the little border hut. He was in there a good five, six minutes. It seemed like an eternity. When he came back he took a good long pause before wishing me a Merry Christmas“.

Since 2009, Canadians are required to carry with them more than just a driver’s licence for identification for US land border crossings.

Canadian visitors have to produce an enhanced driver’s license, or should be part of the Trusted Traveler Program, or should have, well, a passport. Scans, photocopies or artistic impressions are not in the list. Reisch’s case appears to be an isolated example of flexibility at the US-Canadian border.

Reisch used his iPad once again on his return journey when he showed the device to Canadian Customs, and believes that digital identification will arrive in the near future. He says, “I see the future as 100 percent being able to cross with your identity on a digital device — it’s just a matter of time“.

US Customs and Border Protection hasn’t commented on the matter so far.