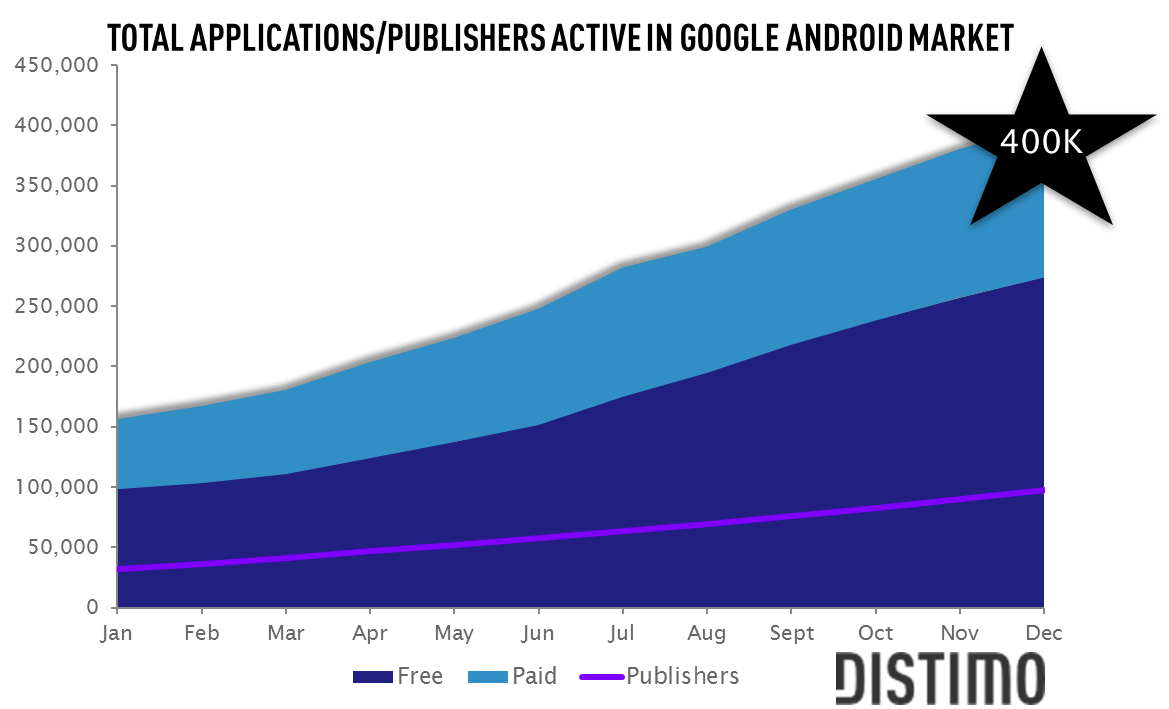 Google’s Android Market reportedly raised past the 400,000 app mark this past weekend. It was just last April when Android Market got 200,000 apps. Then, next 100,000 apps were registered in last August, according to Distimo, an app store tracking service. In its analisys, Distimo also estimates that the main contributors to reach this 400,000 milestone are free apps. Roughly, 2/3 of the available applications are free in Android Market. The percentage of free applications has steadily grown month over month from 60% in April 2011 to 68% free content at the end of 2011. Comparing this achievement with over 500,000 apps of Apple’s App Store in mid-December tells not only that the gap between Android and iOS stores closes, but also that it closes rapidly: rise between 300,000 and 400,000 apps took Apple 7 months, whereas the same gap was closed just in 4 months for Android.

Estimates of 500,000 apps in Apple’s App Store might be not entirely correct: the half-million app figure was first mentioned by Scott Forstall at the iPhone 4S event back in October, though subsequent independent research that month suggested it was more like 456,000.

Whatever the corrected figures may show up for Android Market, it doesn’t really matter. What matters is the rapid expansion of the Android ecosystem that will overtake Apple’s lead in apps very soon.

Nevertheless, the total counts might be quite misleading, too. For example, counts of apps specially designed for Honeycomb and Ice Cream Sandwich didn’t reach more than several hundreds which is virtually nothing compared with approximately 100,000 apps for iPad. Sure, in general Android phones running ICS won’t have many problems with apps designed for Gingerbread or even Froyo. But Android tablets could turn out a different case where’s the lack of specially designed ICS apps for them.