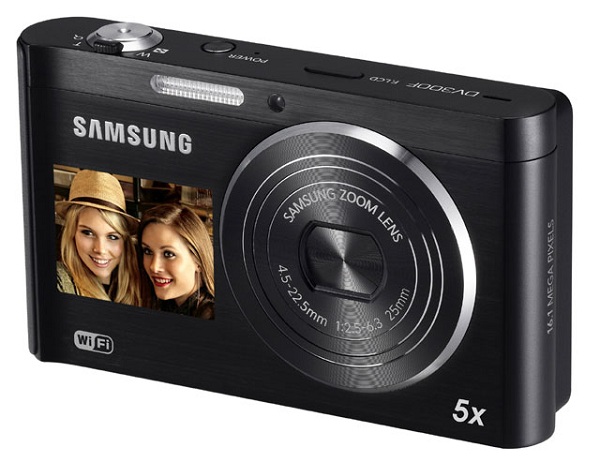 Samsung has come out with point-and-shoots earlier which featured Wi-Fi,  the SH100 and the ST80 are two, but this is the first time that Wi-Fi has made its way into the new DualView camera style.  The Samsung DV300F, which comes equipped with a 1.5-inch front-facing LCD (will help with self-portraits), has a 3-inch rear-facing display, 5x optical zoom, a 7.76mm 16 Megapixel CCD sensor, and a 4.5-22.5mm, f4.5 lens.

The camera should perform well when there is good lighting, but the pictures won’t be that perfect in dim lighting conditions so prepare to be blasted with flash for those dimly lit nightclub photos were all too used to snapping. There is also an image stabilization system, most probably an electronic one which will help low light situations too.

Its most useful feature though, is the Wi-Fi connectivity.  It will allow users to upload images and video directly to online sharing sites including Facebook, Flickr, Picasa, and YouTube. You will also be able to wirelessly transfer images to a computer, and the camera integrates with Microsoft’s SkyDrive.

Other features include a visual self-timer, a feature to merge three images together, and Motion Photo which will allow you to freeze objects around a moving object. And for keeping young children focussed on the camera, an animation displayed on the front LCD will help a lot, although that might not help with adults who can’t stay still.