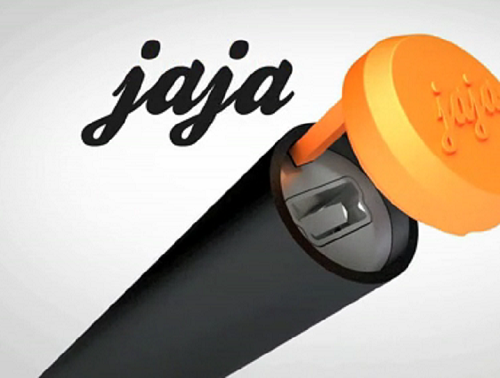 Although there are many different stylus designs out there to choose from for the Apple iPad, we encourage you to check this one out. The jaja is the first ever pressure sensitive stylus for the iPad and it appears to be pretty impressive.

As you might agree, all the current iPad stylus designs are nothing much more than sticks and there aren’t any compelling reasons to use one instead of your finger. That is where the jaja comes in.

The jaja stylus comes with a new system developed by Silicon Spark called the “ii” system. This new system allows jaja to communicate the pressure that a user applies on the display. And you won’t need wires, Bluetooth or Wi-Fi.

The two customisable buttons on the stylus will allow you to select menus, and you will be able to change brushes, colors, fonts or tools and all that can be done without moving far from the drawing space.

For communicating with the iPad, the jaja uses high frequency sounds that are above human hearing but can be detected by the iPad microphone. The makers are promising 1,024 levels of pressure sensitivity, and the stylus has a transparent tip and a USB plug for quick recharging.

The jaja will retail for $69.95 once it gets funding from Kickstarter, and at present is available in black. Check out the video and head here to know more about it.