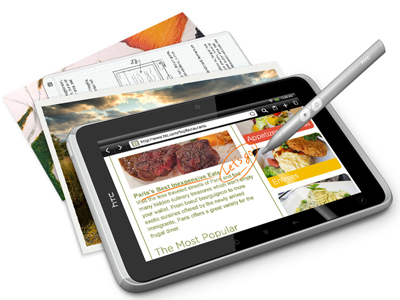 HTC is now delivering on its promise to bring Honeycomb to the Flyer.  The HTC Flyer was first released in April 2011 with Google Android 2.3.3.  The Android 3.2 Honeycomb update is currently rolling out to those devices anxiously awaiting the upgrade.  The update for WiFi models has begun, with 3G users getting the update early December. Some users have stated they have noticed  more responsiveness and the frustrating wallpaper lag appears to be gone. However, it remains to be seen how much lag will be eliminated when using a stylus for notes and doodles on this interesting tablet. Then, Ice Cream Sandwich on other tablets pops up left and right, even if more in promises than real firmware builds.